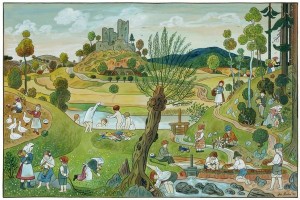 visiting exhibit of works by Czech artist Josef Lada has been extended until February 20, 2017. Come and see the works by Lada on display in our third floor Pilsen Hall before it's too late.

Josef Lada (1887-1957), Czech artist, illustrator, and cartoonist, is best known as the illustrator of Jaroslav Hašek's World War One novel The Good Soldier Švejk,  Born in the small village of Hrusice in a cobbler's family, he went to Prague at the age of 14 to become an apprentice binder. Entirely self-taught, he created his own style as a caricaturist for newspapers, and later as an illustrator. He produced landscapes, created frescoes and designed costumes for plays and films. Over the years he created a series of paintings and drawings depicting traditional Czech occupations, and wrote and illustrated the adventures of Mikeš, a little black cat who could talk.