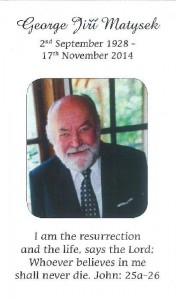 I met Mr. Jiří Matýsek, who for many years was the leading personality of Orel / Eagle (Australia, New Zealand and South Pacific Region), in the church of Saint Francis de Sales in the Sydney suburb of Surry Hills, during a Sunday Holy Mass, celebrated for Czech, Moravian and Silesian compatriots in the Czech language. It was in the Eighties of the last Century, around 1985.

At that time, the Czech Chaplain in Sydney (and also for Australia and New Zealand) was the Liberec - born P. Ing. Petr Eliáš (R.I.P.), originally a chemical engineer, who in the Sixties emigrated to Rome, to study for Priesthood. After being ordained as a priest, he migrated to Australia, to take over the already - mentioned position of Czech Chaplain in Sydney, after the death of Rev. Vladimír Ondrášek in the second half of the Seventies (P. Ondrášek was born in Újezdec u Přerova).

Jiří captivated me from the very beginning by his kindness and his enthusiasm for what he was doing. He edited and printed the Eagle Three-Monthly Periodical, which he then freely distributed, inter alia, to us, church goers, after the Holy Mass. Apart from well-chosen articles by other authors, he also included his own articles and commentaries that were always to the point, both concerning the subject of the article, and its indispensable “spiritual charge”, which was never missing in his deliberations. He was a deeply believing Catholic and Christian, and his Motto was:

Would That Our Nation (Nations) Returned To God !

His personal life was very dramatic, until “landing at the tranquil shores of Australia . . .”

After the February 1948 communist putsch / coup d’état, he was imprisoned by the communists in one of their infamous prisons, (I do not remember in which particular one, even if he himself personally told me many years ago - perhaps in Mírov or in Valdice). He managed, at the intercession of Virgin Mary (his own words and witness), to escape from jail, not wasting time hiding on the Czecho-Slovak territory, but immediately proceeding across the border to the West (I do not remember if it was originally Germany or Austria).

In his new country, he married an Australian wife (Beryl Matýsek), with whom he had four children (two sons and two daughters), so that the Matýsek clan is alive and well in Australia, both the male and female lineage. The Matýsek family lived for many years in the Sydney suburb of Avalon (more precisely Avalon Beach), at 1A George Street (what a street number and a street name - a mere coincidence, perhaps ?), about 75 metres from one of the many beautiful Sydney’s Northern Beaches that are being washed by the South Pacific Ocean. When the Matýseks moved, a few years ago, to Winmalee in the Blue Mountains, 75 km west of Sydney, I said to myself: what a pity !

He was a man of great faith, hope and love, and also personal courage.

He will forever stay in my heart.

May Our Lord Jesus Christ Grant You Heaven !