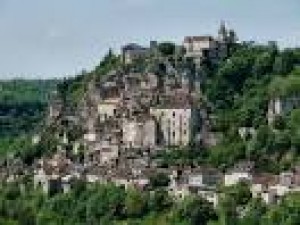 Some time in the seventies, I travelled with my husband in Europe. We started flying to Vienna, Austria. We rented a car there and continued through Italy, Genoa and along the Riviera to France where we visited Nina and her lawyer husband, Edmund´s friends from his teenage years. We stayted with them several days in Gramat. There were taking us around on interesting places like through historical caves with decorated walls, by drawings of its people of 18,000 years ago.

Next visit was paid to ROCAMADOUR, a big church or temple, used in past centuries by Christian pilgrims (travelling by foot) from the East Europe (Poland, Bohemia, Austria) to Spains holy places. It was presumed that it was built by Christians.

When we wanted to go inside the Rocamadour Church, Nina and her husband declined, saying that they had been there many times before. So we went in, only Edmund, my husband, and me.

Inside the church was very, very dark, only one small light illuminating windowless place. After a while I could see a black Madonna with child statue in her arms, like carved indeed in a mahogany on the altar. We knelt or sat down and prayed.

After a while I started to feel uneasy, which developed into emotional pain. I started to feel Iwas dark skinned, younger, single woman. In the times in some half millennium in pre-Christian era. My emotional pain was caused by my fear that people in the village will stone me to death in several months ahead! I did not know for what! But my feeling of fear and emotional pain grew bigger and stronger every minute to the point that I was grasping for air!

I turned to my husband and said: „I cannot stay any longer! I have to go out!“ „I will go also!“ Edmund responded.

We walked into the full sunshine outside and I said:“This church was built into the big rock-mountain, long, long ago, like 2,500 years ago, by unknown dark inhabitants! Not by Christians!“

„How do you known?“ asked my husband, with suspicion.

As I could not share my inside impressions with him, I said, „I just know! And I will find the proof! Letś go around, till we find a historical plaque, which is usually found on such buildings!“

We went around till, for sure, we found such a plaque. It listed visits by French Kings in various centuries. At the very top was carved in: „This temple was built in the first millennium before Christianity by unknown deities.“

A am inclined to think it was my Déja' vu in the place, where I lived once before..

The cause of my anguish was probably that I was pregnant and single. It could have been a crime for a single woman and punished by being stoned to death.