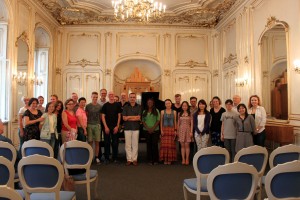 We received following very interesting text. It was written by one student in summer courses, organized on Charles University in Prague.

A Summer at Albertov - Prague

The one and same question is invariably put to me whenever I tell people that I am studying Czech, and it usually comes with a surprised, unbelieving expression: “Why Czech?”

The reason for this recurring question is two-fold. First, people recognize that Czech is not a very widely spoken language. And second, it’s about me: as one coming from China studying in the United States, there is virtually nothing practical in my background that would justify a need to be so committed to studying this language, except the vague impression I had early on that Czech Republic is a nation of great learning, artistic creation and spirituality.

Now instead of answering it, I will try to prove that a practical reason as such is not necessary, and that the very success of the Czech Language and Culture Course at Study Centre Albertov is its best justification.

Indeed, very often people study a foreign language for practical reasons, and rightly so. But this doesn’t have to be the case. As PhD students in comparative literature, we are required to master three languages and have reading knowledge of at least one more. Contrary to the belief that everything is translatable, the idea behind this requirement is that language is not merely instrumental, but that it is culture in itself. And though not immediately profitable, culture is able to make people’s life more fulfilling in a higher realm.

After attending the month-long Czech Language and Culture Course at ÚJOP Albertov, I am convinced that this is also the belief held by its organizers. This course would already be a success if it only concentrated on language teaching. But it is so much more than that. I sense the organizers’ genuine desire to showcase the very best of this country’s incredibly rich cultural heritage in a serious but accessible way. And this is perfectly blended with a solid curriculum in language teaching.

In Prague, we were introduced to the diverse cultural community of this great city, something not easily available even to those who have an eye for it. Interactions with Czech musicians, writers, filmmakers, actors and scholars meticulously chosen by the organizers allowed us to gain an understanding of not only the culture, but also the great souls that created them. Through conversations we got to know the Czech mindset, which was so inextricably bound with the Czech language – is there a better way to learn a language? This is the exact antipode of the kind of “cultural tourism” that my friends from Prague have been complaining to me about. In a month’s time, I believe many of us students have the feeling that we are the privileged few who get a precious glimpse of the authentic Czech culture. Most importantly, it consolidates my admiration of the Czech nation.

To give our visit to the popular Český Krumlov as another example. Besides all the touristic attractions (which were fantastic indeed), we also enjoyed well-tailored, often exclusive programs that included intimate exposure to the Baroque theatre of the castle, the multi-facet history of the town, the amazing Gypsy music, the dynamic street arts, and especially the legendary Egon Schiele’s works, which accurately captured the genius loci of this enchanted land.

Naturally, this would not have been possible without a committed, thoughtful and supportive team headed by Director Marie Poláčková, and comprised of wonderful people like Katka Šturmová, Josefína Veselá, and many others. And I don’t take everything for granted: my past experiences of language courses in other countries remind me how precious and extraordinary Albertov is. Of course, I would not omit to mention the fabulous the morning language classes, thanks to our committed and beloved teachers.

Our modern world is becoming smaller and more monotonous. To get deeper into a culture beyond visiting its hottest touristic attractions is more and more a privilege. As a result, people are sometimes content to stay within their comfort zones, and be put into pigeonholes that determine the most “useful” languages and cultures they should know. Sadly most of us don’t have many alternatives. But I would venture to say that the Language and Culture Course at Albertov makes a great alternative not only readily accessible, but also immensely fulfilling.

Thanks to Albertov, I now have no difficulty answering that recurring question people still pose to me.