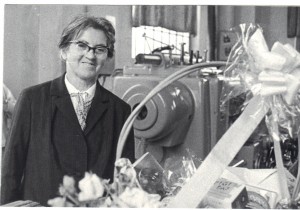 Oh, this complicated Europa with so complicated history. Especially in her middle, in her heard, where I, but before me my mom, mami , maminka, was born. We have been always on the way for some marching armies between West and East.

This is one of the reasons, my mom was citizen of three differed countries , moving just two times in live and never actually from the state formation called Czechoslovakia, where she was born.

You will be surprised, what everything can happened, if you live in the middle. In heard of Europe.

My mom was born soon after my grandpa came from the battlefields of World War I.  In June 1921. She was a 4th from 10 children my grandmother will bring to the world. Just 4 will survive hard live in the purest part of Slovakia Kysuce.

Her father was very fain cabinet maker, but for years he was making just coffins. For his children too. Only when he was lucky, he can make some tables or furniture for the newly-weds or a cradle for a baby…

This is the main ground to send my mom, right when she finished a elementary school in 8 grade, with only 14, still a child, in the world. Alone.  On the other end of the state, northen Bohemia, where the people speck different language, are “rich” and look down on the poor Slovaks. But they like them for job. They can pay them less for good and hard work.

It was depression and the World War II. was coming nearer.

Her new employers tell the little frightened girl:” The light there in the mountains are Germans.”

She was tiny, dressed in kroj, national costume for her region, have a long braid to the waist and was very scared.

This first employer treated her not very good. Her “little chamber” was in reality a place over the stable. The only heating, it was a winter time, was the breath of caws and horses. The servants year ends and begins on December 26, the holy Stephan day. My mom  was a maid for all work.

This work was so hard, that her body have not strength to grow  and mature. She was almost 18 and not a woman.

One nice old farmer’s wife from neighboring farm sah her struggle and offered her better work place, real chamber and more money. She brings her also to the doctor, who help  my mom with the vitamins and hormones. I can thank the farmer’s wife, I can be later born.

My mom’s life changes a lot. But the new struggle was already on the way.

The war hat not officially started yet for the rest of Europe, but the Germans occupy the Czech’s lands, making them to Protectorate Boehmen and Maehren. Slovakia proclaimed her independence: A fascistic Slovak State.

My mom was forced to take the Slovak citizenship, Czechoslovakia don’t exist anymore. Czech have not state. The Slovaks are “free”. But for Czechs and the rest of Europe, they are traitors.

My mom is a traitor living in a small city, where everybody now’s, she is a Slovatschka.

She is allowed to stay, because she is working in agriculture and this is good for “Reich”. ( for German Empire).

But form travel home, she need a passport and an not bring home food, she have to pay custom duty and sometimes, they just take her stuff away. She still a teenager and still look like a school girl with her hair short now…

The war ended and Czechoslovakia is born again. My mom have back her citizenship, speak Czech better then Slovak, in her identity card called citizen certificate has written nationality Slovak.

In this summer 1945, full of hope and joy, she married my father, who have in his identity card written Czech. To the churches she drives in a couch, borrowed from house of Wallenstein pulled with white horses, like a princes.

I was born next summer in frontier city Ceska Lipa, former Sudetenland, where my parents moved, like many young families starting a new live. In my citizen certificate is nationality Czech. For children in mix marriages you can chose one. It was dad’s decision and also a better one in post war time.

We left my mom last week in her new home in Sudetenland, in frontier of the new born Czechoslovakia. Here almost everybody was new. Many young families started here a new life. My mom was very happy there. She had her own household without a dragon mother in low and most important she was Pani Nemcova, miss Nemec and now a Slovachka. She stay first time home with me, her stepdaughter, my father was a widower, and my sick little brother.

But if we lost my brother, despite every struggle to save his fragile live, my mom got very sick. When she recovered, she started working. It was very modern and socialistic for women work in man’s professions. She was a turner in a factory repairing locomotives. And she was very good in it. She made it in this communist time to a hero of socialistic work. This mean she was the best between her coworkers.

But when I was my mom’s age going in the world, we moved back to the little town, where she came as a little scared Slovak girl. The town, where she met my father and where my grandparents had a house. They passed away so we came to take over; because if we did not come, the communist will take over.

My mom was not happy in that house and later after my dad’s death she by herself one little one, close the castle on hill a lived there to the end of her days. But before that she had to go true more changes.

After big hopes in spring 1968 the Russian came. It was tragic for everybody and I left the country coupe years after. With my husband and 3 children, my mom’s whole life now, and left her alone, just with her stepdaughter. She can visit us, but we can never go back.

Then came the unbelievable velvet revolution in 1989. We could now visit my mom, but Czechoslovakia was in disintegration again; peacefully, not like Yugoslavia in Balkan, but in disintegration. My mom was again the Slovak lady living in Czech Republic.

Like in the time of the Free Fascistic Slovak State, my mom had to decide, where she belonged. She came to the Czech lands when she was 14, she has a home there, she raised 3 children, buried her son, and her husband. However, there are people in this little town, they still remember where she came from and they asked her, if she will go back home, to Slovakia.

Despite her feelings, my mom still had to ask for Czech citizenship, because her identity card stated that she was of Slovak nationality. She had to write to the Slovak Republic authorities and ask for her criminal records (remember she left at 14 years of age), fill many forms, and wait for hours in a police office with Gypsies (Roma and Sintie) who were born in Slovakia and also had problems staying in Czech Republic because their criminal records have not always been clean and this was the excuse for Czech authorities to get rid of them.

My mom is now 80 years old. If she does not take the Czech citizenship, she will have problems with her pension, with her medical insurance, and lots of other problems. She has “her” graves there; she lived here her whole adult life. It is just formality, you might think, but it is very serious and her brother told her: “I can never forgive you; you sold your native country.” He is a big Slovak patriot. But remember, he is still alive and can still go to school, because my mom left the country when she was 14, just a little girl, and sent all of her money home. She also sent bread and other groceries, which she received from her employers. Did she sell the country? Or did the country sell her?

Her family adored her and is thankful, but for them, she has to stay as a Slovak. Yes, she still has this written in her citizen card in the nationality space, but her citizenship is in Czech Republic. Unbelievable. Like I told last time: This is the Europe, where the states are built not on citizenship but on you descent, nationality, on your blood! We saw it just a couple days ago in Scotland, but the Scottish have been smarter the Slovaks.

Slovak pride is why my mom was always a Slovak but citizen of many different states.