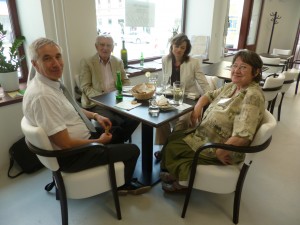 First allow me to introduce myself. I am Eva Strizovska, a publisher of very interesting and unusual Czech magazine you may have never heard of. Let me tell you its history

We started to publish our magazine Czech Dialogue for Czechs at home and abroad 24 years ago after the so called Velvet revolution. Many tens of thousands Czechs left their homeland between 1948 and 1968 during the Communist regime to start a new life in free and democratic countries. In total it may be over a million Czechs living abroad with their families. I have assumed that to keep a dialogue between those who left the country in the course of history and those who had stayed home would be necessary and beneficial to both sides.

Many left empty-handed and had to start a new life under difficult conditions. Although most countries had offered Czech immigrants a substantial material assistance, they still have experienced various hardships before eventually became successful representatives in various fields. We at home also had to start anew after the Velvet revolution in 1989. Our first subscribers were members of the Czechoslovak Society of Arts and Sciences (mostly from the USA). Gradually people from other democratic countries of the world became subscribers. Later, a related civic organization the International Czech Club united its members. It organizes cultural activities, discussions, lectures, mutual meetings, outings, etc. Its members are university professors, artists, entrepreneurs, farmers, retirees, and students. Some members never left their homeland yet they have a positive attitude to those who did and now are coming back to visit or to stay.

We have variety of chapters on (about) Actual, Czech History, Culture, Czechs Abroad, Letters, Czech Language at home and abroad. We welcome opinions, letters, questions, be in touch with our readers, welcome new authors.

My school education missed our history, since it was misinterpreted by the Communists during the time of their rule. Names like Zenkl, Drtina, Krajina, Peroutka, Tigrid, Bata, Beneš, Thomas and Jan Masaryk and others should not be forgotten. Fortunately, I had chances of developing my education about Czech history thanks to my contacts with the exile, the emigrants and old patriots abroad. I have met people such as Mojmír Povolný, Boris Čelakovský, general Knoll, Míla Rechcígl, the Stránsky´s family, politicts and  founders of daily Lidové noviny and magazine Pritomnost.

Dear friends, I would appreciate your help in recommending Czech Dialogue

to other readers and potential advertisers. Our editor Ms Martina Fialkova is also in charge of advertising, organizes our ICC and films. Other cooperators are welcome.

TRIPS ABROAD, EXPERIENCES OF MY COMPATRIOTS

Publishing an independent monthly magazine brings lots of joy, even though I often swear that “this issue is definitely the last one.” To be in contact with good, educated, decent and successful people is wonderful. Those are our readers. I had the opportunity to travel to Czech communities in distant countries both for shorter and longer trips. This has helped me to understand their life experience in different parts of the world and learn from it.

Most became my friends. What had impressed me most was their sunny disposition in spite of the fact that they had experienced hard life and quite many lived through some bitter disappointments. Their energy most likely comes from the weather - some have 340 sunny days every year; also from the vastness of the land – 1 citizen per 1 kilometer, and from a peaceful and free, democratic country for more than 200 years, just like the USA.

My first visit was to Minnesota to take part in a conference of the Society of Arts and Sciences in 1999. I also visited New York, Chicago and other places. The trip opened my eyes to this very dynamic, great and unique country. At that time we decided to include also articles in English for those who have a Czech “heart”, but no Czech schooling. Since my trip to Minnesota I have been visiting the USA almost yearly and meeting recent exiles and Americans of Czech origin whose ancestors came to the US during the 19th century.

I found them to be very interesting and friendly group of people who are quite proud of their rich ethnic background. European Czechs are glad to invite their American relatives to their homes without any political interference and to show them the sights and beauties of their homeland. Good quality promotion of the Czech Republic abroad and widening possibilities to travel and study abroad to the young is very valuable.

CZECHS AND SLOVAKS DO SUCCEED IN THE WORLD

The happiest part of the work with the Czech Dialogue is the realization that my countrymen are doing so well all over the world.  They succeeded to adapt to new circumstances, become successful students, workers, specialists. And as they achieved excellence in many professions as scholars and artists, they helped to improve the image of their country of origin and contributed to world culture at the same time.

Allow me to quote from a letter from Marie Dolanska who was one of the volunteer translators of our magazine and who also translated this paper of mine. Marie wrote:

“It is not sufficient to just mention the famous Czechs. Many Americans, Canadians, etc. may admire Dvorak or Forman from afar, but they never had a chance to meet them personally. But if they get to know Mr. Novak or Mr. Novotny, they see them daily at work, or have a glass of beer together and possibly become friends. And if the Czech newcomer is a good, honest and hard-working guy, he promotes his country just as much as any of the “famous” ones.

We the newcomers must always remember that each of us is in a sense an “ambassador” of his country. Our homeland is judged by the way each of us behaves in the newly adopted land. Until about the 1970’s Czechs and Slovaks had a very good reputation in the USA. They were known as hard working and diligent people who were experts in their various crafts and professions.

MČK (ICC) what do we do, organize

Social events such as HOVORY BEZ HRANIC (talking without borders), where authors of books, artists, musicians etc present their work.

Educational and humorous trips to the national monuments such as the Říp mountain; it was attended by Sokols, our readers and others from Canada, Switzerland, Sweden, USA, Australia and Tasmania. We traveled to Luhačovice spa etc., organized a variety of concerts and musical events.

Last years we produced documentary films about Czech people in the World – Czechs in Sweden, in Switzerland and Vienna.  You can see them tomorrow after trip to Manetín. Martina Fialkova is one of authors of these films with a cooperation of KAM Studio in Kyjov.

When I have an opportunity to travel abroad and meet our compatriots, I write books about it. So far I have published 4 books dedicated to them, now the fifth one is already at the printer. You can see it on my table at the door. The books are about Texas, Great Plains and about Australia, next one is about California.

On this occasion I would like to express very great thanks to my dear helper and friend Mrs. Marie Dolanska. She translated all articles for the magazine and three of my books. Probably some of you had a chance to meet that excellent old lady. She passed away on March 8th this year. She was 93 years old.

I would like to accent very important fact: We have no financial support from the state and our team consists of only two people: Martina and myself. I hope that we will continue still for some time to come! Our small budget allows us to keep a little office, one phone, one computer and a small printer. Our secretary and others are volunteers, thanks for that.

If you find our work useful, please help us as you can. (vypsat účet and we also have our represenatives in some countries as USA, …)

Thank you for your attention.