Ana Maria Janků: promoting Czech music is a link to my past 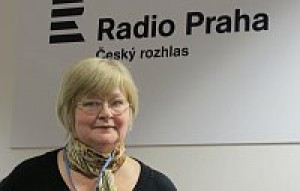 Ana Maria Janků was born in Argentina, but her link to her roots and in particular to Czech classical music is strong, thanks to the influence of her Czech parents. Today she is taking her own and her parent's Czech legacy further by promoting Czech music at the Czech cultural centre in Buenos Aires. When she visited Radio Prague's studio a few days ago we spoke about the fulfillment this brings her and why her work at the center has become the pivot of her life.

"Yes, in fact I founded the Czech cultural center in Argentina in 2003 with the support and patronage of then ambassador Mrs. Edita Hrda. There were so many things to do - she came with the mission of first determining how many Czechs were living in Argentina. We did not know because the distances in Argentina are huge."

So how many Czech did you find?

"Well, there are several statistics but it was announced by the embassy that there were around 60,000 Czechs living in Argentina. For us this was a big surprise because we do not know each other - all the Czechs. "

What kind of events do you organize at the Czech cultural center nowadays?

"Chamber music basically, because we cannot afford an orchestra, at least not for the time being. But I constantly try to obtain sheet music -partituras as we say in Spanish - to offer to very well-known local interpreters mainly of philharmonic and symphonic orchestras and we have several groups and several formations that every year interpret Czech compositions and slowly but steadily we are creating a need. Americans say create a need and go for it, so one of our objectives has been to create a need for Czech music. "

Apart from music, what about Czech film or literature?

"'Well, with films - again because of the rights - it is difficult, but there were many collectors who kept original copies, really historical copies 35 mm film reels, that were restored and we managed for example in 2006 to screen a series of I think ten films from the 1960s. It was the result of a chain of people of goodwill because the collectors offered these copies for free and we got the Teatro San Martin, the municipal theatre involved, with a nice projection room and they helped a lot to make it all come true. Regarding films I can say that at that time we were very happy because we reached all the schools of cinema in Argentina so we created a bridge to these younger generations to see films that they only knew by name in their copybooks. Nowadays we have Pablo de Vita -a local critic who specializes in Czech films, he has been here several times and works for one of the leading film journals. He contributes to our festival every year and week of Czech culture -so we always have a week of Czech films commented by him."

You are clearly doing a lot to promote Czech culture in Argentina - you must also know a lot of expats - how do they live there -are they close-knit communities who remember their roots and maybe preserve some traditions?

"It differs. If you go to the north or if you go to Rosario you will find that they keep their costumes, they dance dances that perhaps here you don't dance here anymore. I remember that a few years ago an official group of expats visited the Czech Republic and they were crying because they heard music that they hadn't heard for years, music they had heard from their grandmas and they started to dance together because when you are abroad you keep doing what you were taught."

And it's the same with food? "Yes, with food too, though with some differences. We were arguing the other day about the way to prepare goulash or to prepare knedliky (dumplings) but in fact there is not just one way of preparing those -each family does it slightly differently. But in Buenos Aires - to come back to your question - even within Buenos Aires the distances are so huge that there are communities who gather together but do not come to Buenos Aires city. So Buenos Aires the federal district has one profile I would say. I do not mean to discriminate -it is a reality stemming from life in the metropolis. People work, they gather in small communities and in many cases I can say there are more people attending our events that have no direct connection - no blood ties to the Czech Republic. And in the small communities of expats they continue eating the same goulash, dancing the same dances - but they stay in the time. I cannot speak against that, because I belong to that you know - it is in my blood - but there are different ways of getting in contact with your roots."

Ana, you were born in Argentina and you have quite a complicated family history. Can you tell me how your parents got there?

"My mother was a teacher (a pre-school teacher at Krivoklat) and she also taught piano lessons - she loved playing the piano and she fell in love with my father - Tonda Janků. Dad ... he always fought for his ideas, he fought so much for his ideas that sometimes he lost the ground .but I inherited that and I am very proud of it. My father was an accountant and he was very fond of planes and engines and so on. When they had to enroll for the Second World War to defend against the Germans he was enrolled in the Czech air force and after the war he couldn't believe that the Soviets were coming to help. He got into trouble with the Soviets. He was imprisoned and said that in order to survive mentally and physically he learnt Russian -he could write and speak Russian perfectly. Then later, he managed to escape to Berlin. He always liked an Italian song by Iva Zanicchi "La Orilla Blanca La Orilla Negra" - it means the black border of the white bank -because it was a former enemy, a German man from Berlin who helped him to escape. I have never forgotten that. Nobody is totally good, or totally bad. So this man helped my father to escape to Berlin and from Berlin he sent some messages to my mother -in a love story -asking if she would like to follow him. They were dating, they were not a couple yet and my mother said yes, of course. And of course, when you have to leave only with the essential things - you consider what the essential things are. She took some sheet music for the piano - her favourite ones - the special overall she wore as a teacher - I still keep that - and she forgot her documents! And that was decisive to my being born in Argentina. Their plans were to go to Brazil, but when they arrived there they would not accept my mother -she had some papers saying who she was, but it was evidently not enough for the Brazilian authorities. She was already pregnant with me -so they continued by ship to Buenos Aires. The flag was Brazilian and my mother was furious saying she did not want to give birth under the Brazilian flag when they had turned her away. So they got off at Buenos Aires. I was born and they stayed there. But that's just the first part of the story. Like many people during the war - especially when she was pregnant when she was travelling - she was homesick and started having amnesia problems. And when I was 9 - I was very young so I can only recount what I was told - my father helped her to return to the Czech Republic -or then Czechoslovakia - only to visit her family because the doctors said that might help since in her conversations she was longing for home and in 1960 on April 30th my mother became a dot in the distance -that was the last time I saw her. Then I had a mother by correspondence, because the Soviets did not allow her back. The authorities gave her a pension, but she died alone here in 1991. Several times I attempted to come, but my father would not allow me to do it -so it was tough. "

So in a way you are fulfilling a legacy by your work - propagating the music she loved?

"Well, when Mrs. Edita Hrda -she knew I was working for the Cologne opera house at the time -asked me - Ana what can we do to promote Czech culture - I said several things, but then I said -well, if I want to honor both of my parents then music was the answer. Because at night the best memories I have of them was of my mum playing the piano and my father playing the violin -and the harmonica, as I said - and sometimes, I was two so they tell me - I have the feeling that they would play an old gramophone record and they would dance to it together and I would be on my father's feet hugging him. So those are my first memories of Czech music. But I feel happy. I cannot imagine myself not doing it. It makes me happy.