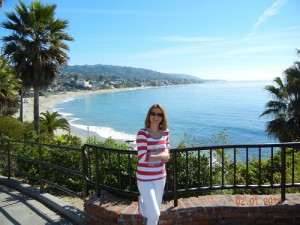 So Bruce is in Europe. Again! Bruce just loves Europe! He is so happy there. I already know that he needs his annual dosage of Europe to be happy. And I am sitting here and have to laugh at all those people who thought I married Bruce to get to America. Did anybody think about the possibility that Bruce married me to get to Europe??
When I married Bruce and came to America, the people who did not know us were suspicious of me. From time to time they would give Bruce “friendly advice” that he should know that as soon as I get the green card, I will leave him. Sometimes they were so rude that they would say it in the front of me. Needless to say that Bruce never talked to those people again, and cut them out of his life entirely. Still, to the public, I became this “Russian bride”. Why Russian? First off, Russia is bigger and everybody knows it. Secondly, Czech or Russia – not a big difference in the big world. We were both part of the Eastern bloc, both former communist countries and have a similar language. Third, Russian brides were very popular in America. They were basically exported to America for the purpose of marriage. I still remember, in late 90’s, all those catalogs where the Russian girls and woman were soliciting themselves. I read their stories and felt for them. How terrible their life must have been if they were seeking salvation in a marriage with a stranger; very often a sick individual, in lucky cases just an old man. All the laws changed few years later when the problems with human trafficking and new age slavery started. I believe that those catalogs do not exist anymore, certainly not legally. Curious people would ask me over and over where and how I met Bruce just to find out if I was one of those women. Neither Bruce nor I cared what people thought. We knew our friends knew and families knew too. And the beauty of America is that most Americans also did not care, and treated me with dignity and patience when I was lost in the new culture. I learned not to bother with explaining from what country I came. Where is Czech or what does the word even mean? Russia, former Yugoslavia, Chechnya, Poland, and Romania all became my new countries of origin.
One time I was babysitting my nephew and nieces at my in law’s house. All the adults left somewhere. They went probably shopping. I got specific instructions from my father-in-law to hand out some documents to his client who will stop by later that day. Few hours later, an older gentlemen showed up at the door steps and was asking for the documents. I welcomed him in and handed him a pile of papers. He smiled at me and said: “Oh, I know who you are! You are the new daughter-in-law from Kazakhstan!” Kazakhstan? That was a new one for me. I nodded that it is close enough and then rushed back to the house to look at the atlas to find out where exactly Kazakhstan was.
To be fair, my friends and acquaintances from Europe, and Czech in particular, also did not know which state Bruce was from. Is it Colorado, Nebraska, or Ohio? And where the heck is Ohio anyway? The world is huge and there is no point to keep explaining. You either know it or you don’t. When we were moving to New Hampshire nobody, absolutely nobody from my friends and family (including me), knew where it was. Some thought that we are actually moving to England, while we were moving to New England. How confusing?! So I have learned my lesson to never judge anybody about his or her knowledge of geography.
But back to the point. Here I was new in America. Eventually I got my green card, and citizenship followed. Bruce’s family stood by me and swore to the INS (Immigration Naturalizations Services) that I did not marry their son and brother for the green card. I will be always grateful to them for that.
The funny moment came when Bruce said he wants his Czech green card too. So we went to the offices in Prague only to find out that he is not eligible. To get a green card you not only have to be married to a Czech, but you also have to speak the language and have permanent residency there. Uh, oh! “Well, maybe someday I will move here”, was Bruce’s reply. With his love for Europe, someday could come at any time. I can totally see him living in my parents’ house with them .
Sending greetings to Bruce who is living in the most beautiful part of Prague right now and enjoys his time by doing what he loves: teaching, meeting with friends and family, and traveling around Europe.
KD 2013