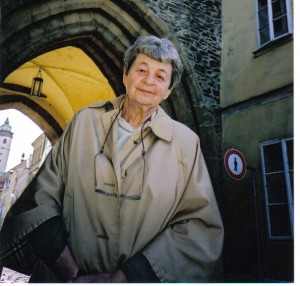 From Vienna the papal legate Christoph Schoenborn arrived to celebrate mass on the 12th of May this year for the 450th anniversary of the renewal of the Prague archbishopric. In the cathedral of St. Vitus, Vaclav and Vojtech seven bells were heard, three of them new. About that time Vilma my Bohemian compatriot also came from America via Vienna. We agreed to meet in Kout na Sumave near Domazlice, in the tavern “na Vobiralce”. On Wednesdays and Fridays they open at 10a.m. for retirees. Year before last the Kout 12 % beer was recognized as the best Czech beer. I advised Vilma to taste the black 14%, women like it because it is sweet. The guys behind the table were all driftwood; that is what we call those who at the time of the Bolshevik served in the barracks and picked the local beauties from the farms which were ruined by collective farming. After 1989 the properties were returned pro forma to the families which get a tenth of the profits for letting a coop run them. This is probably the reason why in Kout the right wing ODS party always wins elections. Jirka Baar is one of the few local guys, like myself. Some time ago I referred to him in an article for Cesky dialog as a descendant of J S. Baar. Vilma, who in America watches out for the purity of the Czech language wrote me that maybe a relative, hardly a descendant because Jindrich Simon Baar was a priest. The guys were not at all astonished how correctly Vilma speaks Czech, and what she still carries in her head about her native area. About the area which until the end of the second world war belonged to the Counts von Schoenborn: the Kout estate belonged to one of the counts von Schoenborn. People here have good memories of him. They say that once in a while he used to stop and have a drink with the regulars. The largest part of his income came from the brewery, founded in 1736. The beer was shipped in barrels great distances, all the way to Bavaria and Austria. Today it is shipped to the whole world. During the revolution of 1945 some juveniles got the idea of shooting at German soldiers, since they had not had enough courage during the war. The unit of the Wehrmacht decided to take revenge and plunder the village. The count went to the woods and took revenge on the soldiers. His loyalty to the Czechs did not save him from expulsion. It also did not help the present archbishop of Vienna, who is in charge of this year’s Prague celebrations. His mother told the reporter for Czech television in Vienna in Pilsen dialect which she preserved – the Schoenborns ran estates from Pilsen to Lovosice- how it was: They were only allowed to take along two bags of bed linens. A few days ago she showed in front of the camera a cup and a saucer, which back then had been wrapped in a bed sheet and smuggled to Germany.. “Do you remember Masaryk?” Vilma asked the fellow drinkers. They hesitated. Yes, sure, Jan Masaryk… “No, I am thinking of president Masaryk. Well, compared with me you are juveniles. I was a girl of sixteen when TGM died.” She wanted to know why here the nobility and the church are put on a pedestal, as it was precisely Masaryk, whom we all honor but who was no friend of either of them. None of the pensioners wanted to say anything about this question. I remarked that if the present “subjects” of the Schwarzenbergs are happy, there is no problem. Inquisitive Vilma also asked if we prefer Klaus or Havel. They all favored Klaus. I kept quiet. It bothers me a little that the guys in the taverns are more concerned with football and hockey, maybe tennis on the constantly running screen of the commercial station, than with the fate of their nation. In 1997, after many years, I was invited to the celebration of the reopening of the synagogue in Kdyne, 4km from Kout. I attended high school there. I looked for the yarmulke which a Sephardic Jew gave me many years ago in Zimbabwe. Damn it, I did not find it in the cupboard. I took along a nicely ironed handkerchief, but it was not necessary. The synagogue had been converted into a museum. The only member of the once large Jewish community who survived the war, dr. Lev Hartman, the doctor who took care of me in my childhood is no longer among the living. In 1938 the Jews had the last chance to influence their fate. For many this was when they found out that according to nazi laws they were Jews. No other countries wanted to take our Jews., but there were exceptions. The Canadian government favored immigration from Europe, especially farmers. Vilmas father got together 39 people, mostly families and mostly Jews. An official of the Canadian Pacific Railway which was in charge of immigration for the Canadian government inspected the farm Novy Dvur near Horsovsky Tyn, which was run by Vilma’s father, was enthusiastic about him and about it and approved of the group of applicants for immigration to Canada. Aren’t you amazed with what Vilma burdens her head at the age of ninety one.