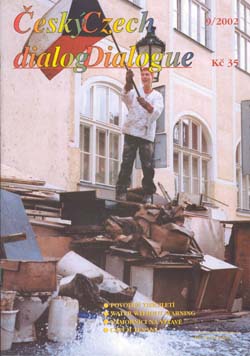 On the evening of Monday 12 August, my wife came home from work looking worried and told me that the stream (Rokytka) outside our house had become a raging torrent and that there was a notice stuck on the front door of our block of flats informing residents that a third degree flood warning had been declared in the area (lower Liben, round the corner from Karlin). Being of a somewhat apprehensive disposition she suggested we go to spend the night at some friends who live up the hill in Dablice. So we phoned and made our way to theirs, picking up a bottle of wine on the way. Despite the fact that there had already been extensive floods in south Bohemia over the weekend, we arrived feeling rather sheepish at our voluntary, and - we told ourselves - purely self re-assuring, evacuation. Our friends as always made us feel at home, but our sense that we had over-dramatized the situation was reinforced by the mayor of Prague Igor Nemec appearing on TV that evening to re-assure the inhabitants of the city of a hundred spires that the approaching mass of water would only amount to "a 20-year flood" and that disruption to life in Prague would be very limited. By the morning, "a 100-year flood" was expected and large areas of Prague were being evacuated in haste.

When we went back to check our flat in the morning, we found police ensuring that everyone had left. We had five minutes to grab some clothes. Even at this stage, I didn't imagine that it would be more than a week before we would be able to enter the flat again, and more than two before the building was declared safe for habitation and electricity re-connected. In Lidove noviny, one man who experienced the devastating floods in Moravia in 1997 and this year's floods noted that one common factor was the frequent belief among people that the water would not reach them to any significant extent. In Prague, this disbelief was reinforced not only be the reassuring words of the Prague mayor, but also by the fact that though there was rain in Prague, the origin of most of the water was far away in southern Bohemia.

Many of those whose flats were flooded have criticized mayor Nemec for underestimating the degree of danger. If they had been warned of the level of water that actually occurred in time, they could have saved their belongings. Nemec argues that he passed on to citizens the information he was given by specialists from the regional water board, who in turn argue that their calculations were correct but their predictions were undermined by further torrential rain over the night between Monday and Tuesday.

The head of Prague zoo in Troja also blamed misleading predictions for not giving the zoo enough time to evacuate. Many animals were drowned or had to be put down after becoming trapped, including the elephant Kadir. Some of the South African seals took advantage of the situation to make a break for freedom. One of them declined, continuing to circle round its normal territory, while a second was recaptured in a flooded castle park near Prague. Gaston, however, became a media star, rejecting the overtures of zoo staff who followed him up the Elbe -- though freely accepting the fish they offered -- and successfully emigrating to Germany. The story did not have a happy end. An exhausted Gaston was lured by German emergency services near Dresden, but subsequently died on the journey back to Prague. The director of our local theatre Divadlo pod Palmovka says that, after viewing the rising level of the Vltava from the Liben Bridge on Monday, rather than relying on the reassuring predictions of officials he preferred to make his own estimate of where the water could reached. Despite the best efforts of volunteers and staff to save what technical equipment they could, the main theatre, reconstructed over the last few years, was totally destroyed by the waters, which reached to around roof level of the ground floor of Palmovka's main street. Water is as merciless and indiscriminating as fire and I've not noticed even a single ground floor of any building on the main street or the surrounding residential areas that escaped devastation. The Palmovka theatre will start the season performing at a smaller stage higher in the building, which in the long term it is intending to use as a second stage for more experimental productions. The company is also going ahead with an early autumn tour. By coincidence, many of the planned venues, such as Ceske Budejovice and Decin , were afflicted by the floods. The company has decided to donate all takings from performances to post-flood relief work.

After leaving home on Tuesday morning, we joined the crowds drifting towards Liben Bridge to take a look at the rising Vltava. The water had made its way up the side streets and was beginning to lap into Palmovka high street. One of the streets nearer the river was already a river itself. The management of the Prague metro and the town authorities assured citizens that it was safe to travel by metro, but after seeing the progress the water had already made towards Palmovka station, I remarked to by wife that they could say what they liked but there was no way that I was going down underground with all this water rolling around the streets. The metro was originally planned by Russian and Czech experts to serve, in addition, as a shelter for thousands of people in the event of a nuclear attack from the `capitalist aggressors'. This meant that it should have been hermetically closed and able to withstand a deluge of water that could have resulted from the bombing of the water regulation system in Prague. It is very fortunate that the metro's shelter function was tested when no-one was actually in it. Water started seeping into the metro, twenty minutes after the last train had come to its destination. Since the water has subsided, experts have been examining what went wrong and whether the metro was closed up properly and in time. They have not come to any final conclusion, but have established that water smashed through one of the special barrier -gates at Palmovka station and subsequently burst through the ceiling of the B line and got into the A line at Mustek station. The cost of repair will be enormous, as will be the disruption and the crowding until the lengthy repairs are completed.

On Wednesday, we watched on TV police patrolling the streets around our home in motorboats and emergency services rescuing those who had irresponsibly ignored the evacuation appeals. One group of people in Karlin district who had refused to leave on time phoned emergency services after watching the building across the street collapse.

The rains were followed in Prague by a heat wave. Within a week or so of seeing our local streets on TV looking like Bangladesh at flood time, we were walking round in dust clouds worthy of the Grapes of Wrath. The piles of destroyed furniture and fittings, including floorboards, were gradually taken away and replaced by piles of coal and river gravel from the cellars. These have also now been taken away, but it will be a long time before things get back to normal.