Dominik Duka - A TRADITION THAT IS A CHALLENGE. 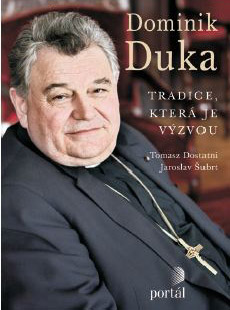 We are experiencing a fundamental break in the relationship between the Church and the state. The politicians of all the parties are discussing the necessity to finally settle the proprietary relationships that have been burdening our country for decades. It is being negotiated at the highest levels - by president Vaclav Klaus and by the archbishop of Prague (as of January 6 Vatican named cardinal) Dominik Duka. What do they have in common? Certainly obstinacy with which they try to solve this issue. In his book, Dominik Duka talks about the problems of our society in relation to his own life and to our history. Exactly in the spirit of the II. Vatican council: what is important is a dialog.

He evaluates our history from this point of view- going back to the times of Jan Hus. For example he says in this connection: ”….even other nations succumbed to this danger, namely the danger of impatience - the desire to put things in order immediately. Such impatience then produces lack of tolerance when we try to improve the other person against his will. Impatience governed the inquisition, the husites, the communists- and I do not know what else will come under its influence in the future.” What about the most recent history? Do you know that during the first World War our people felt that God had abandoned them and thus one and a quarter million of them left the catholic Church? A half a million people joined the Czechoslovak Church and the rest became atheists! Dominik Duka recalls that T.G. Masaryk “had to create a bridge between the Church and the new state.”

In 1935, after Masaryk had resigned, there were two candidates for the presidency: The liberal - leftist (not communist!) Edvard Benes and the conservative professor Bohumil Nemec. The Vatican supported Benes by recommending him to all the Christian-catholic political parties and he was elected President. How does D. Duka evaluate the actions of president Benes during the war until the year 1948? By using Christ’s words: “Whoever is without sin, let him throw the first stone.”

If you want to know and understand our recent history (other than actually living through it) you should read this book. It deals with the year 1948, with socialization and the 1960’s, with August, 1968 and with the normalization, the canonization of the Czech saint Anezka (Agnes) and with the unforgettable Prague mass served by Jan Pavel II in 1990. D. Duka’s confession is open, logical, cordial. He is looking at us from several photographs: a man who grew older, gathered stature and attained his present view of the world with confidence: ”God allows but does not forsake.”

The book was written by Tomasz Dostatni and Jaroslav Subrt.