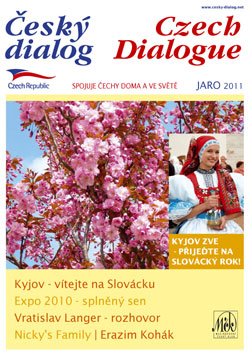 At the beginning of the third chapter entitled Life which we have selected for you, the author is describing the situation in the Czechoslovak Republic right after the fall of the communist regime in 1989 and the following developments up to the present day.

Is there any meaning to be found in all of this?

There is deep depression emanating just from this question. During the first days after November we had no doubts about what to do. After forty years we had to finally return to Masaryk's legacy of humanity and democracy. The focus of all of our endeavors finally became unequivocally clear: To create - or rather to reconstruct - a society of decent and tolerant people and a republic that had been an oasis of freedom, democracy and social justice in Middle Europe.

Today it seems that nothing of all of that remains. Our republic fell apart in our hands before we could make a peep. Instead of decency and good will only malice and hate burst forth, and from all those ideals only one goal remained - to get rich quickly, pereat mundus. Are we to sacrifice everything to this? Does life have any meaning at all?

For our ancestors in antiquity the simple preservation of existence could have been a sufficient goal in itself. The mammoth hunters who lived precariously at the edge of powerful natural forces had to expend all their effort just to survive. But as soon as humanity learned to overcome immediate threats of cold, hunger and death, it started to search for other goals. Satisfying the basic needs - mental and physical - can provide sufficient meaning to life only as far as man does not have to face cold, hunger, loneliness, death. But then what? What does man need when he is assured of food, warmth, safety and fellowship with others?

Our Egyptian ancestors delved into this question. The Egyptian society succeeded in satisfying basic needs for itself more than three thousand years before Christ. What else does man need? The old Egyptians answere - first of all security, stability. In this world of enormous changes man desires those things that last, that do not change, things that he can count on. Therefore they created - as a counterbalance to this unreliable life - or more exactly this uncertain state - an image of an afterlife that would be free of all changes - a life where nothing ever varies, nothing ever disappears from one's hands. That is why they devoted so much effort to the mummification of their dead and to building pyramids which were provided with an ensured supply of wine, grains and oil. They longed for immobility, safety from all change, for stony and rigid beauty.

Our Greek ancestors looked for the meaning of life elsewhere: They also valued beauty, but not in eternity; they admired the beauty of body and mind in this world.

Beauty and goodness, the ideal of Greek aristocrats, included a beautifully cultivated body and a sharp, well educated mind, deserving to be admired by the contemporaries, which the Greeks called polis, or community. The honor that they desired was first of all the respect of the community bestowed upon those who possessed beautiful bodies and minds. To have food, warmth, security was not enough. To achieve fulfillment man needs most of all to be appreciated and respected by his fellow human beings.

Yes , man needs appreciation - our Hebrew ancestors knew that also. But there is a huge difference between the Greeks and the Hebrews as to whose appreciation they desired. For the Jews it is not polis, a society of people equally imperfect as oneself, but God almighty himself. He requires something entirely different from the polis. He is not impressed by possessions, nor by beautiful bodies or by a sharp mind - blessed be the poor! God is impressed by the purity of a man's heart and by justice in society. The purpose of life is not to satisfy our needs or achieving approval of other human beings, but rather achieving sublime humanness in oneself and love and justice in relation to others. This is to be striven for.

All human conceptions about the purpose of life have one thing in common: they represent a transcendence, or a connectivity to something which man considers higher, more important and loftier than self-gratification by accumulating adornments and toys.

Humanity has always viewed egoism as an eroder of humanness.

Egoism may begin to appear as a virtue only in times of a civilization breakup, when all striving for improved humanness disintegrates. When life does not have any higher purpose, where all higher endeavors appear to be hopeless, then all that is left is overeating, and accumulating of more and more useless stuff. A symptom of a decadent civilization - as it appeared during the last two centuries of the Roman Empire - is the fact that people do not see any other goal in life except accumulating property. The best symbol of this phenomenon were the old Roman vomitorias - rooms used by the banquet guests to vomit and then continue to stuff themselves - because what else was left?

In old Rome we can clearly observe a reflection of our civilization. We do not have vomitorias, but we have dumping grounds. Even though we do not use everything that we possess, we continue to accumulate more. Because what other goal is there in life when all yesterday's ideals are breaking down? In a nonsensical world nothing else is left besides consuming more and more. The irony of our situation is - taken objectively - that today humanity is facing a more critical problem than ever before in its history. For millennia the world and nature lived their own lives, while humanity existed "on the edge", completely absorbed by its greed and by its wars. Nature appeared to be eternal, mysterious, always renewing itself, exacting and generous, having all the qualities that humanity ascribed to God. During the last generation the relationship between humanity and nature changed drastically. Nature became an endangered species. Humanity is growing at an extremely rapid rate. Even though only about twenty percent of the world population consumes at a European or at an American level - it is enough to gradually destroy the planet. Humanity that needed for centuries to only take care of itself is suddenly facing a task that cannot be postponed: to save the Earth. This is now the purpose of human life and of all our endeavors: to save the Earth and find a way of life that would facilitate sustainable coexistence with the natural world. Otherwise we will destroy the world - and ourselves.

This is meaningful: Everything that can overpower today's fatal endangerment of the world has meaning. And it has immediate importance for us. We have a place on this Earth and we are responsible for it: for that country about which we sing that it is a beautiful heaven on earth. For forty years we have devastated it in our consumer mania; now it is up to us - in the twelfth hour - to try to save it. It is up to us to create a life style that would guarantee that our grandchildren would also be able to live in a beautiful land of their fathers. We are not spoiled teenagers any more. We are - whether we want to or not - "shepherds of creation", responsible for the sustainability of our human society. This is our present transcendence, our intervention, it has meaning: to take care of this country and of this Earth.

This is the most popular book of a well-known Czech philosopher. The book is being published for the third time. It consists of short and inspirational reflections about good and evil, about God, life and various life situations, but also about animals, nature and about our place in it. It teaches us to see, to ask questions, to think, to look for connections and to consider our own meaningful role in today's noisy world.

The book is very readable and easily understandable. It consists of the author's short talks that were broadcast by the Czech radio once a month on Sunday. The book's title, which seemingly does not have any connection to thinking about life's orientation, forces us to think. Why did the author call his book P. S. Dogs when his fourteen chapters have nothing to do with dogs?

Erazim Kohák (* May 21, 1933) philosopher, publicist and writer was born in Prague, where he has been living and working continuously since 1995. He spent forty years in exile. The educated and patriotic Kohák family escaped with their children to the West after the communist coup d´etat in 1948. After two years they settled in the USA, where they started to work in various blue-collar jobs. Erazim started at the same time to study philosophy and religion; later he obtained a scholarship. After finishing his studies he became a university teacher and professor at Boston University. After November 1989 he has been teaching at the Philosophy Department of Charles University in Prague as Professor Emeritus. He also works in research at the Institute of Philosophy of the Czech Academy of Sciences. When asked by news reporters around the year 2000 what his definition of happiness was, he said: To do some work that has meaning, to do it well and to have someone who appreciates it.

To him, philosophy is an endeavor to get oriented in life and in the world. His early works dealt with social philosophy, mostly with the basic ideas of democracy. At present he devotes his time to study the problems of man and his coexistence with nature, questions of ethics, and the philosophy of the Czechoslovak and Czech national identity. He is the author of more than twenty publications. His most successful book in English so far is entitled The Embers and the Stars (University of Chicago Press 1984 and 1987). It deals with searching for the ethical meaning of nature.