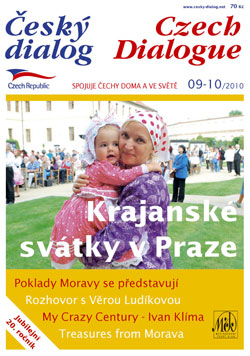 At the close of a social meeting in which Sharon showed a film about Karel Hasler , the people had lots of questions . It was very useful for me because I found out what was not presented clearly in the film and what kind of introduction I should prepare for next time. Some people also wanted to meet with me personally at a later date. One of those was an older lady named Helena Lombardo.

Linda remarked: ”That will be a problem because Eva did not get an International driver’s license (Oh, no, next time I must not forget!), and there is nobody who would drive her from Levenworth to Kansas City.” Right away Dave spoke up and said that he drives daily to Levenworth to work. So the next day he picked me up at Linda’s farm after work and drove me to town to se Mrs.Helena. During the trip I had some time to chat with Dave.

He surprised me. He said in Czech: “My name is Jan. My sister’s name is Marie, and I am taking classes in Czech.” I asked him why he was learning Czech at age 60 and did he have any Czech ancestors? He said no. He is learning Czech because he simply likes the language. He is an American, his daughter lives in Germany. When they visited her once, they also went to the Czech Republic and visited Cesky Krumlov, Ceske Budejovice, Karlovy Vary, Prague. They liked the country very much and Dave was disappointed that he was not able to converse with anybody in the Czech Lands. Therefore he decided to change that so that next time it will be different – and he has already demonstrated that he has learned a few Czech sentences.

The smiling Mrs. Helena lives in a nice residential area where there are many trees, bushes and flowers. She loves flowers, her house is full of them. It is as neat as a pin, decorated with little sculptures, paintings, etc.

She is 83 years old, still drives her car even though she has problems with her knees and walks with crutches. She took me to dinner to a nearby restaurant called Olive Garden. Both of us ordered excellent Italian food and had a nice chat. She talked both Czech and English to me, mixing both languages.

‘How come that you still speak Czech?” I asked her. “That is because of my father. He was a great patriot. He used to say proudly: ’We are Czechs.’ I was born on a farm near the little town New Prague( Nova Praha) in Minnesota. At that time- at the beginning of the 20th century- there were many Czechs living there. We had a Czech church, and school. All of us were Catholic. My grandfather came from Veseli in Moravia, my grandmother came from Bechyne- that is where they make those nice painted plates.”

Mrs. Helena smiles a lot and radiates good cheer. Yet her life was not always easy. Her mother did not like her very much. She let her know that she liked her sons better…. Helena was very lucky that she had a good and devoted father. And her marriage was not particularly happy. She married a Frenchman who was not good to her- even mean at times. They had two children, a daughter and a son. The daughter became a physician and has a practice in Chicago. Her son died of cancer, and so did one of her brothers- both of them were heavy smokers. Helena’s husband was a pilot. She worked in a company where she had to take care of parachutes. In time she divorced her husband, married someone else, but continued working with the parachutes. Her other brother has two children – both of them are physicians. All of this supports my experience with Czech people: After immigrating to America and overcoming initial difficult conditions- they usually make sure that their children, and especially their grandchildren receive higher education.

I spent a peaceful night at Mrs. Helena’s house in a room full of flowers and pictures. In the morning we had a nice chat at breakfast which my hostess served with great care- and then it was time to say good bye. Dave was knocking at the door and we drove back to the farm of my friend Linda,who lives with her daughter Marianne, son-in-law Richard, 14-year-old grandson Richard Roo, seven cats, three horses and one happy dog. I wrote something about her family in last issue...