Festival Dialogue of Cultures kicks off in Prague 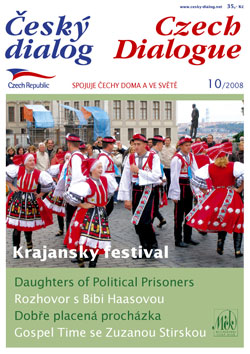 Some even claim multiculturalism is not possible in Europe. But not do Jakob Hurrle and the whole Multicultural center Prague (MKC) that is launching a festival of different cultures in Prague today.

"Prague is becoming increasingly more multicultural but what do we know about our neighbors who are often foreigners?" asks Jakob Hurrle.

The 5th year of the festival celebrating the encounters and blending among different cultures, languages and religions in the Czech Republic will take place at the Municipal Library of Prague at Mariánské náměstí, in Kampa Community Centre, and in the arcades of Lucerna Palace and its Kávovarna Café in Vodičkova 36, Prague and will last through October 7.

The festival will also screen documentary films and show photographs made by young people in seven European cities as a part of "Cultures from Around the Block" international project. The exhibition will be presented at the Municipal Library of Prague.

Part of the festival is also an exhibition which will present life of teenagers from two culturally and socially different localities of Prague focusing on both similar and different sides of their lives. Black and white pictures took by children from Žižkov and Modřany capture important moments of their lives of which we generally know so little.

Debates, children and the soup contest

The 2 and 3 October will see four public debates on co-existence with foreigners, about their lives in family, at school, in the city and in the street together with us or just around the block. They will take place at the Municipal Library of Prague.

One of the debates which will be conducted in English and start at 7 pm on Friday October 3, will try to look for answers to a question whether the issue of foreigners living in Prague is different form the situation in other European cities and whether Europe needs a common strategy for integration of foreigners.

Saturday October 4 is mainly dedicated to children. Japanese, Muslim, Jewish, Chinese and Gypsy workshops will teach kids and their parents, should they want how to make an origami, dance a Gypsy dance or how to play an African drum and much more.

One of the best ways to learn more about different cultures is through cuisine. Children and adults will have a chance to taste different soups prepared by ethnic minorities living in the Czech Republic. Out of the Lebanese, Japanese, Romany, Ukrainian and Bulgarian soups they will vote for the best one.