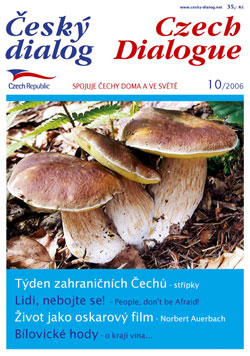 Maybe I am too presumptuous to chose such a title, but I have a son Vaclav from my first husband- whose name was also Vaclav- but mostly I have learned from a certain Vaclav great wisdom which influenced my activities- and I want to wish this last Vaclav all the best to his 70-th birthday.

It happened before the Velvet Revolution- when Vaclav Havel was in prison for the last time. His final speech from the courtroom was broadcast by Radio Free Europe. It really impressed me. He said in addition to other remarks: "Society behaves like an ugly girl who looks in the mirror and breaks it in anger. The fact that I have been found guilty today and that I will be put in prison - that is not my fault or my mistake- that is the fault of this society?"

In the book "Talking with God" it says:" If you are attacked by someone who is not very intelligent and who wants to kill you, forgive him, give him your body, he needs it to grow and you will get another one in the next life?"

This is a bit too strong for my understanding; I think I would at least defend myself so as not to make it too easy for the attacker, but the thinking here is similar: Do what you want to do, what you think is right and do not be afraid of the consequences- those are not your problem?

Today while listening to the radio station Praha I was surprised by the fear of a supermarket salesperson. She said: "I work 15 hours a day as a cashier, I am not allowed to leave my post, not even to go to the restroom, I have no lunch break. I do not get paid for overtime and we have no worker´s union or organization where we could complain. But I won´t tell you the name of my employer, because I am afraid I might lose my job.." This lady is not unfortunate because she has to work so many hours, probably for very little money. She can be called pitiful because she is afraid to lose such a miserable job. She is most likely a masochist because she allows her employer to treat her disrespectfully. Why do such bosses treat women this way? Because they can, because they get away with it! And it is the employees fault! It is fear. Fear that they will lose their job, that they will be unemployed. Because they are afraid that there won´t be enough money, etc? One can also be afraid that- leaving the house- one will be hit by lightning. Fear is an emotion that causes much evil in this world. Psychologists and psychiatrists could and should talk more about it.. For example- if all the women employees left the supermarket, the boss would have to change his behavior.

Before my colleague Fialka made her decision to work with me, she used to be quite fearful and used to say "I would love to work with you, but I am afraid to, I have children, I need more financial security." I used to tell her:" When you will finally stop being afraid, then come and join me, you will be welcome." And finally she did join me and we work together wonderfully- but not like that lady in the supermarket. Each of us does her own work to the best of her ability and we respect each other.

Maybe I am about to irritate all the skeptics - but I still believe even in my sixties - yet I can´t really prove it- that right actions turn into good results. In the end even Vaclav´s courage and attitude turned into something positive- he became President. And so I am wishing him on his 70-th birthday - October 5, 2006- all the best and lots of good health.