Missionaries From Our Land 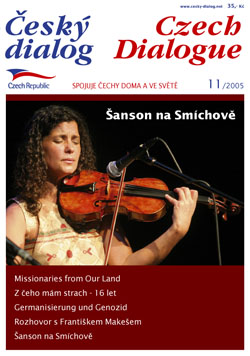 Reminiscence of retired ambassador Virtually all of the achievements of Africans seemed to have come about through the missionary work of the Church, Nelson Mandela, ex-president of South Africa, wrote in his autobiography Long Walk to Freedom. The mission schools trained the clerks, the interpreters and the policemen, who once represented the height of African aspirations.

"Religion was part of the fabric of life and I attended church each Sunday," Mandela recollected. The opinions of missionaries had much weight in tribal life.

In the wake of the outburst of the national liberation struggle in Africa and ever after, Christianity played a reconciliatory role between blacks and whites. The black Archbishop Desmond Tutu, whose mentors ha come from Europe, received the Nobel Peace Prize in 1984.

It was in 1994, soon after the black majority in South Africa won the country´s first non-racial, one-person-one-vote election, that the Slovak Jesuit dr. Eduard Hancko left Zimbabwe for Johannesburg to see his former parishioners.

After coming back to Harare, Father Hancko told his travel story to the participants of "Countrymen´s Friday", as the parties of the Czech and Slovak community held the first Friday of each month were called. Before boarding a coach in the Harare central bus station, he was robbed by pickpockets of his purse containing money and his Zimbabwean passport.

"So, you didnt depart, did you?," was the first question put to him by us.

"Why not? I still decided to go," Hancko said. And then he described his smooth journey. At the border, he was recognized by a black customs officer who, some years ago, had regularly attended Hancko´s sermons and grammar lessons in a remote Southern African province. The man invited his (and our) compatriot for a cup of tea and then provided the priest with a letter of reference for the guards on both sides of the border. And money? What is money for in Africa to the servant of God? Whereever he appeared, he was a guest of the faithful. "Have you been in the Immigration Office to apply for a duplicate of your travel document, Father?," asked the Consul.

"Why should I?," Hancko exclaimed "I hold in safety the passport issued to me in Czechoslovakia two years ago. Hopefully, I shall never again need a passport of an adopted country."

For decades, Czechoslovak papers were denied to dr. Hancko - the communist regime looked down on the emigré clergymen, and cultivating a friendship with them was not the straightest way to promotion for a diplomat. My predecessor, himself a Slovak and perhaps from a religious family, had looked away when he and Father happened to be shopping in the same supermarket.

At a private occasion, the UK High Commissioner told me of his trip to the northern provinces of Rhodesia years ago, when he had still been the Counsellor. Hancko accompanied him as an expert on local matters. Upon realizing from a chat during the tour that Father was legally homeless, my British colleague arranged that a provisional British passport was granted to him for the period before Rhodesia became Zimbabwe.

Within the framework of briefings before going to Zimbabwe, I studied missionary work in the library of the Archbishop’s Palace. When the departure was imminent, I paid a courtesy call to František Cardinal Tomášek, in the company of Jiří Troják, the "uncrowned" head of Czechoslovak exiles in South Africa. Several days after landing at Harare airport, I made the first contact with Father Hancko. We very soon became friends and jointly began to get together the Czech and Slovak community. As the reader remembers, there were several sorts of emigrés abroad, as judged by pre-1989 Czechoslovak authorities. The embassies had cultivated relations with associations of compatriots who had left the country before the World War II seeking bread, while they had a hostile attitude toward people who defected to the West as a result of the events of 1948 and 1968. Hancko belonged to the latter category. He had dared - as he used to say jokingly- to pass by the Czechoslovak mission to avoid being put into a diplomatic pouch and sent to Prague.

There were no addresses of those "to be put into a pouch" in the Embassy chancellery, while Father had knowledge of their whereabouts. It was a great occassion when our community met for the first time, discriminating against no one. We listened to "My country" by Bedřich Smetana and then I begged: "Please, no quarrels over politics". The air in the community was thick in the aftermath of November, 1989, but finally we found a kind of modus vivendi.

Joy and the feeling of belonging overwhelmed me repeatedly when I attended Hancko´s Sunday school classes conducted in English and in Shona language for - just imagine - as many as 500 children at a time, in a hangar. The boys and girls always listened quietly, but were responsive when asked a question. Another time I accompanied Father to a service celebrated in a brick-field outside the capital.

In the sixties in Zambia, I was on friendly terms with another missionary of Czechoslovak descent, Father Prokoph, S. J. (Society of Jesus). Diplomats had very difficult access to the members of government when President Kaunda was in power. It was a kind of anti-corruption measure. I, a 28-year-old attaché, often asked Father to visit this or that minister and to lobby there in our favour. Prokoph had taught at a Northern Rhodesian secondary school at least half of the contemporary Zambian dignitaries, and they kept recognizing him as their principal. The helpful hand was passed to me till the end of my tour of duty and my dismissal due to the events of 1968. Father Prokoph died in South Africa some months before I was readmitted to the foreign service in 1990 following the velvet revolution. I was sorry I could not meet him again.

To pay tribute to the churchmen who left our country to serve needy people abroad I later proposed to bestow on one of them, Father Zdeněk Čížkovský, OMI, the head of a mission station in Zululand, the Gratias Agit award, which he indeed received from our Foreign Minister in 1998. Čížkovský made himself known, besides working among the poor Africans, by helping Czechoslovak defectors to start a new life near the Cape of Good Hope. Father Lang did the same in England, Father Opaszek in Germany, Father Popelka, Father V. Hrubý, SDB in Italy, Father Popelka and Bishop Esterka in the USA etc. But that is another story.

The educational activities of our Protestants deserve our special attention. The Moravian Church, which replaced in the year 1727 the Church of the Czech Brethren, whose last bishop and "teacher of the nations" J. A. Komenský died in 1670, played a great role in many lands. The Moravia priests from what is now Czechia came into close contact with the population of South America, Surinam, Jamaica, Africa, Tibet, Labrador and Greenland. Besides converting the local tribes to the Christian religion, they brought with them new crops, new crafts and changed attitudes towards medicine. Among the social groups influenced by the religion derived from Czech reformer Jan Hus there used to be a higher percentage of educated people than in the rest of the population.

In 1998, president Nelson Mandela praised the Church of Moravian Brethren for its merits in the development of South Africa by naming the presidential home in Cape Town Genadental (Halley of Mercy) after the first Moravian mission in his country.