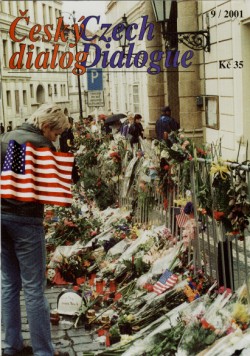 1. Foreign Minister Jan Kavan promises Roma representatives he will submit a report on British immigration check-ups at Prague's Ruzyně airport before the end of the month.
2. Senators criticize Foreign Minister Jan Kavan for trying to avoid responsibility for the affair of bugging equipment at the Foreign Office's Štiřín Palace.
3. A number of people involved in the project to set up a new political party (Path of Change) abandon the project.
The Czech government ignores the act of remembrance for Roma murdered in Auschwitz. It explains the absence of Czech officials on August 2 by saying that the letter of invitation sent to the embassy in Warsaw "got misplaced somewhere".
The investigating judge from the unit for corruption and serious economic crime files a request for charges to be brought against six persons involved in failed company H-Systém, which conned people of considerable sums of money.
6. Austria begins payments of compensation to people who were forced labourers in Austria during World War Two. Around 7,000 victims whose applications have been checked by the Austrians are due to receive compensation by the end of August.
8. New possibilities are opening up for Czech firms to export to the Kamchatka region of Russia, in particular in ship building, the introduction of gas, and infrastructure projects.
9. Decathlete Tomáš Dvořák wins the World Championship for the third time in Edmonton, Canada. (In 1997 in Athens and later in Seville)
British immigration officials (temporarily) leave Prague airport.
German company E.ON. ceases taking electricity from Czech ČEZ because of consumer protests caused by ČEZ's nuclear power plant Temelín.
10. The Senate passes a law that would make all StB. files public. The bill has yet to be passed by the Lower House.
11. Drugs identical to Lipobay produced by Bayer that caused several deaths in Germany remain on sale for at least two days in the CR after they have been removed from sale in Germany.
Communist activist David Pěcha becomes the first left-wing extremist to be charged with the criminal offences of propagation of a movement aimed at suppressing the rights and freedoms of citizens, slander, and spreading alarming news. In the magazine Pochodeň he called for the reestablishment of Communism and for a return to the old order with the help of even armed struggle.
Car maker Škoda published the first photograph of its new Superb model.
13. Javelin thrower Jan Železný wins the world championship for the third time in Edmonton.
17. The Communist Party expresses its reservations to a proposal by Senators to make public all StB files.
The 117 cases in which clean lustration certificates were, in the early 1990s, given to persons not entitled to them were caused by the negligence of Interior Ministry employees and obstruction from the Czech armed forces and Defense Ministry.
18. Czech soldiers are the first unit to arrive in Macedonia as part of the new NATO operation. They praise the warm welcome given them and the high standard of facilities prepared by U.S. forces already there
20. Some Senators prepare a bill to limit the extent of parliamentary immunity.
21. The land-locked Czech Republic has a lease of a part of the ocean floor in the Pacific Ocean between Mexico and Hawaii, where there is a rich bed of coloured metals. Although their mining is not at present economical, it could become commercially viable in the new future.
23. The second "mad cow" is discovered in the Vysočina (Czech-Moravian Highlands).
24. Germans living in the CR request compensation for the injustice perpetrated on them after World War Two, says the president of the Confederation of Germans in Bohemia, Moravia, and Silesia Hans Korbel.
28. Following a rise in the number of asylum request in Britain by Czech Roma, British immigration officials return to Prague's Ruzyňe airport. Their presence is criticized by the Czech media and politicians from across the spectrum.
Agriculture Minister Jan Fencl proposes donating unwanted stocks of beef to refugee camps in Serbia.
Over 100 million tourists visited the CR last year with Prague, spas, and historical monuments the top attractions.
29. Pilots of the Czech national airline ČSA threaten to strike claiming their pay is far below that of pilots abroad and citing specifically Polish airlines Lot.
30. Václav Havel says he will write a book after leaving office. It will not be a memoir but rather a personal reflection.
31. Prague starts a public collection for the repair of Charles Bridge, but confusion mars the launch of the fund-raising program.