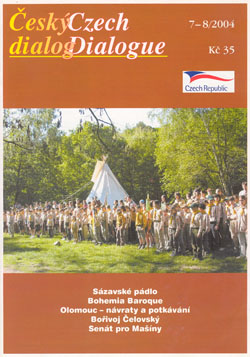 Reviewing everything essential created by architects, sculptors and painters in Bohemia between the first half of the 17th century up to the time of Empress Maria Therese in the late 18th century, gives us a splendid opportunity to recapitulate the significance and uniqueness of Bohemian baroque.

Just like in Austria and southern Germany, Bohemian baroque is based on Italian baroque. There is ample evidence of that thanks to a number of buildings designed by Italian architects in Bohemia. Actually, most of them were Italians who had settled in Bohemia, e. g. Lurago, Orsi and Pieroni. The buildings include the Wallenstein Palace, Cernin Palace, a pilgrimage placed called Holy Mountain at Príbram, and a number of others.

However, rather than concentrating on individual works of baroque architecture, it is wiser to examine baroque as a whole. It is important to realize that at the end of the 17th century monastery, church and palace buildings began to be far better adapted to urban conditions, their design being executed with far more feeling for urban environments. Though creating original urban dominants, they were simultaneously respecting the building style, landscape, and urban planning. Fine examples of that period in Praha are, for instance, the Church of the Knights of the Cross, St. Nicolas Church in the Lesser Town, and St. John’s Church in New Town. By means of silhouettes of churches and cupolas visible from afar, Bohemian baroque succeeded also in the countryside to create environments in open spaces affecting our senses, yet spiritually uplifting, that exercise even today a powerful influence on our idea of home and homeland. Masterful urban designs changed the appearance of entire town sections. Indeed, Praha is the only capital in the whole world that may be said to be clearly baroque in style though, of course, its background bears impressive marks of Gothic. Thus, the combination of baroque and Gothic styles lends special charm to the city even when the baroque style itself is occasionally only mediocre. Afterall, baroque style is in full harmony with Bohemian landscape, the undulating facades and layouts of churches being actually a variation of the rolling hills and the soft, muted landscapes. While in the 17th century ideas, style, and even artists were admittedly mainly imported into Bohemia, the situation changed considerably with the passing time until a style was born that could be, in a sense, considered a national style. It came about thanks to a rapid and organic synthesis, assimilation and transformation of alien elements. Mr. F. X. Salda, the great Bohemian scholar, took care to emphasize that baroque „addressed itself to people in an attempt to win them over. Our people accepted it and, in turn, it exercised great influence on one of the branches of our arts, the so-called folk arts, namely folk songs ..."

In architecture, the Dienzenhofer family played a leading role, particularly Kilian Ignatius Dienzenhofer, the greatest architect of Bohemian baroque who built the splendid Church of St. Nicho las in Praha, to mention at least one truly magnificent monument to his lasting fame (although he was naturally assisted by a number of other archi tects).

Another outstanding personality of Czech baroque architecture was Giovanni (Jan Blazej) Santini, member of an Italian family settled in Praha. Of particular importance are his works designed in the style of baroque Gothic whereby he characteristically enhanced the Gothic tradition in Bohemia.

In sculpture, the leading representatives of baroque were Matthias Bernard Braun and the Brokoff family, especially Ferdinand Maxmilian. Together with other sculptors, they decorated in a splendid way the Charles Bridge in Praha, making it the finest alley of stone statue in the world and simultaneously an important open-air museum of baroque sculpture. In addition to that, Braun also did a superb work at Kuks Chateau. Both of them significantly contributed to the numerous sculptures adorning our cathedrals, churches and palaces. Braun greatly influenced a number of sculptors of local importance living in the country, e.g. the Pacak family.

The Parnassus of Bohemian baroque painting school was blessed by an unusually fortunate constellation of stars, starting with the exiled artists Karel Skreta and Vaclav Hollar who were driven abroad by religious persecution in the country following 1620. Skreta, having renounced the Protestant faith under the influence of his stay in Italy, returned home while the engraver Hollar settled down in Protestant England. Skreta did a number of fine paintings now proudly exhibited at the National Gallery in Praha and at other art museums. Peter Brandl was born and bred in Bohemia and never worked abroad. There are countless places in Bohemia where we encounter his works. The Bohemian portrait painter Jan Kupecky, who lived abroad, became so famous that even the Czar of Russia did not consider it waste of time to pay him a personal visit. Vaclav Vavrinec Reiner, an outstanding landscape painter, decorated a number of palaces and churches in Praha by his fine frescoes.