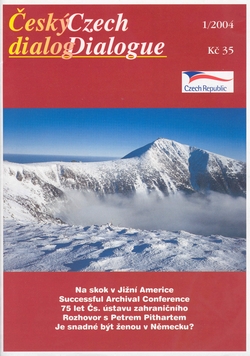 In the days 22-23 November 2003 SVU together with the Embassies of the Czech and Slovak Republics in Washington, DC organized a special working conference related to the preservation of Czech and Slovak archives in America.

This was truly a working conference, as clearly expressed by Senator Moserova, who said that this was the first useful conference of this year, one which made sense and had a definite purpose. The Conference was attended by specialists and representatives of the most important archival institutions both in America and in the Czech and Slovak Republics which deal with the documentation of Czech and Slovak America or with the relationships between Czechoslovakia and its successor states and America. The importance of the Conference was evident in that Czech and Slovak media reported the proceedings each day and even carried an interview with Dr. Mila Rechcigl who was the coordinator of the Conference.

"There are many archival materials throughout America and we are afraid that they might be destroyed...... ninety percent of the material can be found in the basements and attics of individuals and society officers „, Miloslav Rechcigl, President of the Czechoslovak Society of Arts and Sci

ences (SVU) which gave impetus for the Conference, informed the CTK (Czech Press) . Rechcigl went on to say that often these individuals and society presidents are not aware of the importance of historical documents and their progeny will simply discard them.

One of the purposes of the Conference was to bring this impending danger to the attention of Czech and Slovak ethnic organizations in America (numbering several hundreds) and to inspire them to a cooperative effort to preserve these valuable documents for the future. After all, we are dealing with some basic information about the life, suffering and work of the Czechs and Slovaks in America, about the work of Czechoslovak exiles in America, and about the relations between the US and our homeland, which must be preserved because they are an indispensable part of Czech, Slovak and American culture. These documents are irreplaceable and many exist only in the original.

The United States has truly a great interest in preserving these documents which was proven by the presence of so many representatives of important American institutions and the fact that the Conference was organized under the auspices of the U.S. Commission for the Preservation of America’s Heritage Abroad, with its Chairman Warren L. Miller in attendance. It should be noted that Mr. Miller had been appointed to this function by the President of the US.

The representatives of the Czech Republic, as well as the representatives of the Slo vak Republic, have the same interest and many of their archival institutions would welcome receiving these materials. As Rechcigl pointed out, there is so much material that it cannot be deposited in a single archive. What matters is that the material be deposited in a secure place, that is well taken care of and available to the public, regardless of where it is deposited.

This unique Conference doubtlessly served its purpose and surpassed even the expectations of the organizers. It was the first time that the most important „players" on both sides of the Atlantic were able to meet. These were not only archivists and scholars, but also government representatives, community leaders and members of various Czech and Slovak ethnic organizations in America. This was the first important step taken for forming a working base for cooperative work toward the single goal of preserving these valuable documents for the future.

In conclusion – the participants of the Conference unanimously adapted a Resolution which outlined the necessary efforts for the preservation of the mentioned archival materials and enumerated concrete steps and agenda toward the attainment of this goal. This action is, of course, feasible only with the full participation of the Czech and Slovak communities in the US and Canada. We are therefore appealing to all the various societies to lend their hand for this common and significant effort. The mechanism for such cooperation is already in place in the recently created umbrella organization"The National Heritage Commission" to which most of the important Czech ethnic organizations belong. It would be desirable to have the Slovak organizations join in as well.