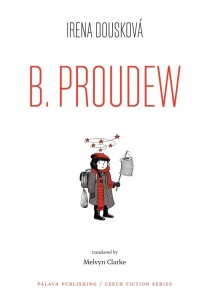 Helena Součková, an eight-year-old schoolgirl in a small provincial town, deals not only with the uniquely dismal side of life in communist Czechoslovakia, but also with more than a few universal issues, like death, school dinners, guilt, obtuse teachers, betrayal, love, Jewishness, annoying little brothers, almost absent fathers, cruel classmates, bogus adults, eerie daydreams and nightmares that reflect the society around her. A child of her time, Helena nevertheless rises above it all with her special blend of grit, common sense and dark imaginings, which speak to us today with clarity and power. Helena has come to be a well-known archetype that many can identify with.

Hrdý Budžes is now a firm family favourite in the Czech Republic and elsewhere in Central Europe. What has the English-speaking world been missing out on?

More about the book

An extraordinarily successful, frequently reprinted bestseller. Often repeated on Czech television in its stage adaptation, Hrdý Budžes has come to be one of the most famous Czech prose works published since the Velvet Revolution. In the Czech Republic alone more than 65,000 copies have been sold. The book has also been published in translation in Germany, Hungary, Poland, Bulgaria, Slovenia, Belarus, Ukraine, Bosnia and Herzegovina.

From the author’s preface

When I started my first year at primary school in Příbram, a district town about fifty kilometres from Prague, in September 1970, my compulsory school attendance began at the same time as that dismal period known as ”normalization”, a time when character was constantly being drained, dignity lost, allegiances turned and lives (particularly professional lives) ruined. (…) That is more or less the background against which the story of my young hero, Helena Součková, is set. It is not a political satire or a panoramic survey of the history of the last century’s latter half, but a reflection of all that in our little everyday lives. Like it or not, children, with all their joys and troubles, are influenced and affected by the behaviour of adults, whom they can hardly be expected to fully understand. But then at the same time, they often manage to perceive and identify what is going on around them far more accurately and in focus than the grown-ups around them might guess or would ever be willing to admit.

Irena Dousková was born in 1964 in Příbram. She graduated from the Faculty of Law at Charles University, but never entered the legal profession. She has worked for the most part as a journalist, as well as a librarian and a dramaturge at a cultural centre. Since 2006 she has made a living from writing books, dramas and filmscripts. She lives in Prague. Her loose trilogy following the life of Helena Součková – Hrdý Budžes, Oněgin byl Rusák and Darda has enjoyed the greatest popularity. All three books have been adapted for stage by the author, and all these productions are still running successfully at Czech theatres. For her starring role in Hrdý Budžes, which has now seen more than six hundred performances, Barbora Hrzánová has been awarded the highest Czech drama prize.