The Word for October 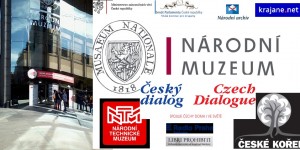 I spent the last two days of September at a conference called Compatriots and the Problem of Identity held at the National Museum. It was organized by the International Coordinate Committee of Czechs from Abroad headed by the Director of Radio Prague’s Foreign Broadcast Miroslav Krupička.

There were many interesting contributions. You could have read the program before, so just at random: Tomáš Grulich, the Chairman of the Senate Commission for Compatriots spoke about the Diaspora as the Partner of the Mother Country. If our state really accepted it, the relations to the compatriots would not only be better but also more advantageous.

It is enough just to look around a bit and notice how many Czech people who have proved successful abroad have the knowledge, experience and feel like coming back and helping their home land which they still cherish in their hearts. But their return has a lot of bureaucratic obstacles that were mentioned e.g. by Petr Bísek, a former publisher of American Papers (Americké listy) in New York (for 20 years).

State officials nod in praise nicely, but it is only talk, no action. We have been waiting for more than twenty years when the Czechs from abroad will be given the right to postal vote. In many countries it is common, but here there are still big official obstacles.

For financial reasons and also because of my long lasting tiredness I am going to publish my 22nd Czech Calendar for the last time this year, so hurry up to book it. But this does not matter. However, what does matter is that Věra Doušová who had prepared ten years of the Compatriots´ Festival with self sacrificing enthusiasm did not get enough money from the Ministry of Foreign Affairs to provide accommodation for several hundreds of participants from Ukraine, Croatia but also France.

And what about the House of Foreign Co-operation that my colleague Lada informed about without being aware that it is probably a commercial issue. And none of them attended the conference either.

Now something about the better moments: Eliška Hašková-Coolidge, who advised many American Presidents, was elected the President of the International Coordinate Committee of the Czechs from Abroad instead of Ája Vrzáňová who died a short time ago.

A number of people were awarded for their compatriot activities: Barbara Semenov – the publisher of the magazine Čechoaustralan (Czechoaustralian); Michael Klimesh from American Spillville - the promoter of everything Czech in Iowa who has written books about the Czechs who once came to this part of the USA and about Antonín Dvořák who used to stay there for some time; Ivan Latko - the chairman of T.G.M. Club in Užhorod, Ukraine; Jarmila Kozáková Markovičová -the secretary and organizer of Česká beseda in Zagreb, Croatia; Olga Maňkovská – the founder and chairwoman of Český spolek in Zvolen, Slovakia.

It is impossible to mention all the interesting contributions, but I promise you will be able to read them one by one on our website. At first that of Blanka Karlsson, the next one by Miloš Šuchma from Canada, then by Georg Kraus from Switzerland and after that many more. At first you will find them on the front page, later on in section Responses.

Look forward to it.