Not only Science Journalism 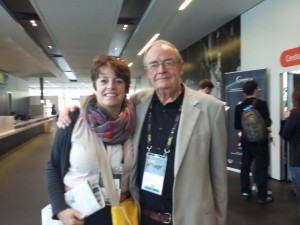 About The Courage to Say: A Spade Is A Spade

As a satellite event of ESOF 2016, EUSJA’s 45 th anniversary was celebrated in Manchester. Vice president Marina Huzvarova from Prague, Czech Republic presented a critical assessment of science journalism. With her very frank and straight forward paper she touched many colleagues.

The European Union of Science Journalists Associations –EUSJA- this year celebrates its forty five years of existence. We could say that it is the best age - neither too mature nor too juvenile. Since have being founded in 1971 in Belgium by seven national associations of science journalists, the EUSJA has grown to a proud group of around 2000 science journalists from 22 countries. The collape of the so-called Iron Curtain in 1989 was a milestone for Eastern European countries suffering an enormous hunger for communication and collaboration across borders in every direction and in every sphere of life.

The Czech Journalists Club started its formal relationship with the EUSJA at the beginning of this century. Although it´s been only quite a short time, quite a lot has happened. As the main challenge for many of us worldwide could be seen as the loss of jobs for science journalists, pushing out the highly professional, carefully authenticated journalistic work in favour, all too often, of unreliable or simply 'quack' articles and endless discussions on electronic media and on social networks, penetrated by the commercial media and infused with PR materials in such a sophisticated way that some kinds of a paid advertisements or politically or commercially-slanted articles can be hardly detected as such by the ordinary reader.

That said, it has brought us to the general platform of contemporary journalism. There are often moans (at least, but not only, in my country) about the fact that experienced and educated journalists disgustedly leave their positions or are being sacked from their jobs and thrown out. Journalistic output has started to be both greater and shallower, everything being subordinated to the dictates of Commerce and global media owners, and the guiding principle of the age: Bigger, Faster yet Shallower! Anyway, there is nothing new under the Sun. Who was the first to utter: The one who controls the media also holds the reins of power…?

As science journalists we might sleepwalk in hope, that the ubiquitous global hunt for a little portion of absolutely anything would touch us less than our colleagues reporting a "normal" world. But it is a big mistake: globalized commerce controls the world of science as well. Is it possible anywhere nowadays that very fundamental research with the sole purpose of exploring the hidden secrets of the matter that surrounds us, from the smallest worlds inside us to the furthest reaches of the cosmos? I'm afraid not. Because of lack of money and any room for the principle of discovery, scientists and also journalists are more or less continually being manipulated to asking how new discoveries can be 'monetized' as soon as possible.

At this point, therefore, perhaps we can see the right place for looking for those "Doorkeepers"... are we these or not? Don´t we also need somebody else to hold the door for us? And what about one more important question: Which direction is the door to open - whether towards the notion of open information for all people – for all the benefit of all, or towards breaking news inspiring some perhaps premature hopes or directing people to the great Temple of Consumerism? We should keep asking, searching tags, clues, but also watchfully looking out for traps and blind spots. Globalised science opens up a lot of space also for us journalists, and this area is too large for any single person – so it is hardly to be overviewed without collaboration.

The next change during the period of the Czech membership in EUSJA is that of disillusionment, especially by members who came from countries engaged before the time of the Iron Curtain and who still remember times when communication was so complicated and even when it was even more difficult to co-operate with partners abroad. That isolation meant a huge loss for scientists as well as for the whole of society. Greater enthusiasm has led to developing cooperation in various fields of life, including journalism. What a disappointment, when we have been confronted with the rising life-style of political correctness. It suddenly turned us back to those time when things were not allowed to called their proper names. And now we are facing the fact that people used to say 'a spade' when in the name of addressing the problem of fairness new names have been given, or even for the purpose of concealment, when society, while externally pretending everything is excellent, its inside is fomenting.

There was no willingness to listen to our experience in similar situations – no light at the end of the tunnel - and whoever says other than the mainstream opinion is being almost criminalized (and I don´t mean extremists at all) - and this is especially the case for journalists. Why don't we learn from scientists how to rely strictly on the exact and calibrated evidence of the situation around us? Shouldn´t it be us, who should try to hold the door open in this field? It will be much better if we could start much stronger cooperation together.

Due to our common inability to point out this possible danger, we are effectively led simply to oscillate in our lives, endlessly and pointlessly spinning wheels. Europe where we live, but also in the world all round us – so globally small now – we find ourselves with ever increasingly large tensions, and to keep discharging all the frustration this leads to under wraps is no longer possible. And in spite of everything we are still not able discuss the problems in a meaningful way, to listen to each other and respect opposing views and opinions, compare them with ours, and to find some good solution.

In this atmosphere, of course, our Organization can´t remain as an untouched, positive island of deviance in a hostile sea. Upcoming tensions, which had begun to manifest themselves even a few years ago, uncomfortably put a black mark on our relations inside the EUSJA. Fortunately, however, this is outweighed by our common goodwill and consciousness that we need to work together, to collaborate across our diverse countries, rather than fragment.

I believe that one of the good examples of traditional cooperation across borders is in the organizing of study trips for our members. Thanks to the individual organizers' willingness to pick up the huge burdens of staging these events down to the smallest details, including the extremely difficult task of getting them all financed, they are succeeding in expanding our members' professional horizons, in educating them by introducing various scientific facilities and equipment, and by visiting Universities, meeting interesting colleagues, as well as allowing us to meet ordinary people in other countries. Nowadays we can all too often encounter some critical voice, that tells us that trips like these just mentioned are valueless, that all information is to be found on the Internet and people don´t need to fly anywhere.

Yes, there are miriades of information, but filtered for diverse reasons, or just unverified and you can rarely see also the fresher and unpolished side. To have to look at the world only through the computer monitor may (or may not) vastly differ from our own knowledge learned in the field. Those who have gained their own experiences through their own eyes and absorbed it into their own skin, those people are far more difficult to be manipulated. But to do that costs energy, time and money anyway. I know this very well not only as a participant in the study trips, but also as an organizer of several such events. At this point, I would venture to say that study trips are a wonderful example of cooperation across Europe. Everyone who has ever participated in the organization of a study trip for EUSJA members, deserves really big thanks.

I will quit my post with this question: how will cooperation after Brexit look like? I believe that we all will find the strength to overcome this unexpected situation. Apparently, it is also a big challenge and a warning as well for all of us. If we´ll not be able to collaborate, to work together, if we let spades not be called spades and we remain outwardly silent and just simmer in our discontent, then the door inside us slams shut.

I believe that our round table here in this year’s European City of Science in Manchester, Great Britain, has showed one us evidence that we all need the open door – and certainly under the condition that all folks comply with the "House rules". It is a basic need of scientists, journalists, Europeans, all people. And - either with gatekeepers or not - this is where I see a sense of cooperation across Europe – and I mean the whole of Europe, in whatever shape it may be in the future.