Prague at the time of Charles IV 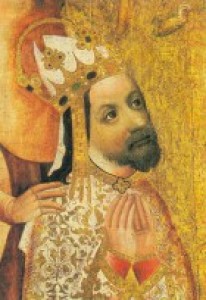 On Saturday May 14th 2016 it was exactly 700 years since the birth of King and Emperor Charles IV. Let us remind ourselves what we as inhabitants of Prague owe to this monarch.

Prague has attracted people with its beauty and the perfection of its architecture for centuries. Now it is a mixture of all historic styles. The medieval basis of the city developed in a magnificent way thanks to this ruler and has no parallel anywhere else in Europe of the time. This era is the topic of a book by Professor J. Royt PhD. which is about to be edited by Charles University publishing agency called Karolinum. Let us get acquainted with its contents.

After Charles´ coronation to the Roman Emperor in 1355, Prague as the capital of the Lands of the Bohemian Crown becomes also the metropolis of the Holy Roman Empire. But even before this event his successful European policy and his Prague coronation in 1347 motivated Charles to his founding deeds, such as the building of St. Vitus´ Cathedral with its precious Chapel of St. Wenceslas, the Stony Bridge (now Charles Bridge), founding the University and the New Town of Prague.

Apart from Charles´ ruling position in Europe these decisions were influenced by his West European education, his cosmopolitan openness as well as his religious faith, his respect to the Přemyslide tradition and his personal favour. Thanks to this situation, builders, artisans, students and artists from all over Europe come to Prague and enrich the city with their presence, work and culture that they bring along.

It is interesting that the new University established on 7th April 1348 was not housed in its own building but in various places in the Old Town or even the Prague Castle which was then being rebuilt. Its present centre called Karolinum is the present of Charles´ son King Václav IV from the year 1383.

It is not possible to deal with all the major buildings as the book rightly does, so we would like to mention the New Town in greater detail.

The New Town was given the royal privilege and the foundation stone was laid in the monarch´s presence in March 1348. Charles IV personally looked after the preparation of its plans and later also its building. Its area was three times as big as that of the existing town. The imposing concept allowed its further development to the 19th century. Building owners did not have to pay taxes for 12 years. Three main squares appeared there: the Hay Market (now Senovážné), the Horse Market (now Václavské) and the Cattle Market (now Karlovo) then the largest square in Europe. The streets were wide and there were also important churches each of which represented a certain symbol (Emmaus Monastery, St. Catherine´s Church and the Church of Our Lady of the Snows – Emauzský klášter, kostel sv. Kateřiny a chrám Panny Marie Sněžné). All this inspires our admiration even today.

The book provides a vivid picture of Prague during the reign of Charles IV (1347-1378) when the Gothic art and culture reached their climax. It contains about 130 photographs, maps and plans.

Based on a text by Martina Fialková