WORD from the EDITOR 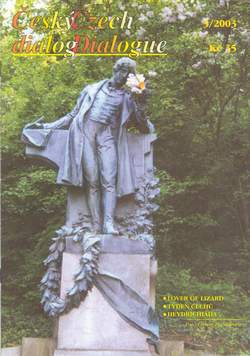 The first of May this year was just fine. Years ago when my niece was five she came home from Kindergarten and said "Mommy, it's OK if you die now, our Daddy Lenin will take care of me." My sister got one shock after another when soon after that, she caught the little girl cutting out pictures from a fashion magazine she had been lucky to get from somebody coming from the West. "Why are you angry?" she asked. "I'm just cutting out pictures of beautiful Soviet people. Our teacher has told us about them."

When Cernobyl blew up at the end of April sixteen years ago, the air was loaded with radiation. Our Communist government tried to keep the information from the people. Their main worry was, that the people would not attend the traditional May Day Parade.

I went away to the country with my children that fine first of May day. We were picking dandelions to make dandelion honey. I had excused myself from attending the parade, stating that there were pressing family problems.

Later, we threw out the dandelions even though the Party assured us that although there had been an explosion, we had nothing to fear. It's true that I have always been a peace-loving creature but at that moment my sincere wish was that the Soviet comrades as well as ours, experience the very worst of tortures.

Yesterday, the first of May 2003, Czech TV presented its viewers with a lovely surprise. For a whole 24 hours, people were able to watch old programs dating back to 1953 when TV broadcasting had begun. What a variety of programs! The news reports dealing with May Day celebrations were really fascinating: The marching throngs with banners proclaiming "Long Live the Soviet Union!" and chanting "Long Live the Communist Party of Czechoslovakia!" the governing comrades on their tribunals lovingly waving to the working masses. It was mandatory for school children to march from their school onto Wenceslas Square. Only there, were they allowed to mix in, with the crowd and disappear. Nobody wanted to bear the banners and flags since it was then their job to carry them back to school.

It is unbelievable that even today, fourteen years after the official fall of Communism, there still exist a lot of totally confused people like my little niece. They were there screaming in the Letna Park. They no longer have the Soviet Union, all they have is Cuba and Comrade Fidel Castro. It was in this spirit that this demonstration was being held. Comrade Jirina Svorcova promised us from the tribune that our land shall again be happy after the Communists gain back their power. Dear God, don't let that happen! I'd rather be unhappy like I was yesterday as I picked dandelions with my grandchildren telling them about the May Days of years ago. They laughed ,not really understanding, but found it amusing.

For you my dear readers, I have a newspaper clipping of those "beautiful Soviet people" well, not really Soviet, but Czech Communists in Letna Park.