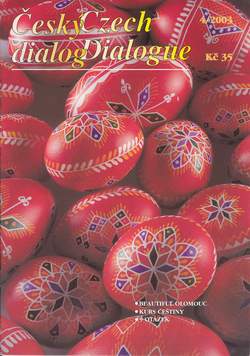 Easter is th most important church holiday of the year. Christians beliefs live through the drama of Christ´s arrest, interrogation, conviction, torture, death and resurrection. The reminder of the resirrected Christ is closely connected with the natural cykle of vegetation.

In Moravia, Easter had a close relationship to agriculture as many customs are connected with the protectionof future crops. Easteri is a "moveable feast" with a diffrerent date each year.

From the historical point of vioew in Moravia, the most important custom was the so called "death removal" which falls on the mid-Lent Sunday called Death or Black Sunday.

Death was represented by the cloth or straw figure of the Morena, representing a virgin in wedding finery.It was carried throughout the village as the maidens sang:

"We are carrying Death from the villiage and new summer into the village." The young people went around the village, then undressed the figureand with a ritualistic saying threw it in the brook behind the village or buried it inder a linde tree at the crossroads, where, according to tradition, the evil of plague epidemics ended.