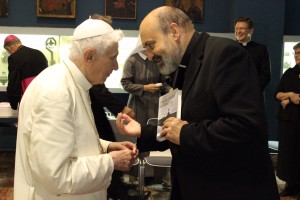 For the last week I have had the honor and privilege of being in the company of Professor Tomáš Halík in New York City (right on the photo). I work for Czech Center NY as a PR specialist and we hosted Professor Halík during his participation in the New Literature from Europe Festival.

In the lead up to his arrival I did my research on this notable Czech public figure and I was intrigued by his extensive resume. He holds a PH.D in philosophy and Sociology from Charles University, a  post graduate degree in clinical psychology from the Institute for Medicine in Prague; the licentiate of theology from the Pontifical Lateran University, Rome; and a ThDr.hab. in practical theology from the Pontifical Theology faculty in Wroclaw. He has also been a visiting professor at Oxford University, Cambridge University and Harvard University. So, I initially imagined that the person I would meet would be a bookish intellectual, left brain dominant man with a logical, rational personality.

I further discovered that during the communist period he was banned from university teaching and persecuted by the secret police as “an enemy of the regime”. He was one of Cardinal Tomášeks closest associates working in the “underground church” after being clandestinely ordained as a priest in 1978. Here was a deeply committed and spiritual man. Pope John Paul II appointed him advisor to the Pontifical Council for dialogue with Non-Believers in 1992 and in 2009, Pope Benedict XVI granted him the title of Monsignor –honorary Prelate of His Holiness.

In 2014 he was awarded the prestigious Templeton Prize which honors a living person who has made an ‘exceptional contribution to affirming life’s spiritual dimension, whether through insight, discovery, or practical works’. It was established in 1972 by the late Sir John Templeton, the Prize aims, in his words, to identify "entrepreneurs of the spirit"—outstanding individuals who have devoted their talents to expanding our vision of human purpose and ultimate reality. By being a recipient of this prize he joins the ranks of historic figures like Desmond Tutu, Dalai Lama, Mother Teresa and Billy Graham. I realized I was going to have the opportunity to be in the presence of quite an exceptional human being and I wondered what impact he would have on my life during his visit.

He was in New York for the NLE festival where he was going to be reading from his latest book, “I  Want You to Be”.  As a best-selling author of 17 books he would be sharing his genre of autobiographical content infused with intellectual philosophy following in the footsteps of St Augustine’s style of confessional writing. He would also be talking on “Faith, Love and God” in another session moderated by Dr. Peter J. Colosi and finally in conversation with journalist Ian Buruma on the global refugee crisis at the Carnegie Council for Ethics and International affairs. Was I to be meeting a creative, right brain writer? I had many expectations.

The man I met is charismatic, a natural orator with a mischievous sense of humor  who displays the gravitas of a human being who has been right in the heart of pivotal points in history.

He is in the prime of his life displaying a robust health which he attributes to healthy living, exercise and meditation. Professor Halík laughingly shared that he is “in line with the corporate brand identity of the Catholic Church in Rome” by ensuring he has an afternoon siesta to invigorate body, soul and mind.

His books are the result of a yearly five week meditation retreat at a hermitage in Germany. During this time of contemplation and silence the new writing is born. He jokes that he writes in the summer so that he has the perfect Christmas gift for friends and family at the end of the year.

He wrote his first book when he was seven years old, “Travels to the North” about his dream to go to the Antarctic.  “Be careful what you wish for” he warns. In 2001 he spent a month retreat in the Antarctic experiencing “a special type of silence, a deep silence surrounded by untouched nature. It’s like another planet and the only continent untouched by murder”.

However, by age 18 he had stopped writing and only started up again at age fifty. He is in good company with writers like Karen Blixen, Richard Adams, Mark Twain, Dostoevsky and Nirad Chaudhuri who came to writing once life experience had given them the substance for enduring content. The passage of time allows you to have “suffered something, to have traveled, to have something to say”, Halík postulates.

The process was kick started by a Prague publishing house who wished him to write a memoir/interview book. He jokes that he thought it would be a good time to write a memoir while he still had his memory. His books are an inner dialogue with himself and the reader. “You have an opportunity to see me through my books and when I attend these kinds of literature festivals I can see you”.

At his first session On Faith, Love and God, moderated by Dr. Peter J. Colosi, he started by speaking about the vision of the future of the church as dreamed by priests imprisoned by the communist regime. The new path was categorized by the statement, “don’t call me Excellency, call me brother”.  While he was secretly practicing as a fully ordained priest, even his mother had no knowledge of his new role. After the fall of communism there was a large population of atheists and he feels this community were not “called by their names” and brought into the fold. He said that even though the ‘dwellers’ in the house of God are decreasing, the number of ‘seekers’ are increasing. “I am here for the ‘seekers’ he confesses”. Professor Halik suggests that we should have patience with the “hiddenness of God, step back and enjoy the mystery –God is inviting us to go deeper and to find the courage to enter the cloud of this mystery”.

His  book “Touch the Wounds” is an invitation to touch the wounds of Christ in today’s world. These wounds are the plight of children, those in misery and poverty in the world, but also the wounds in the souls of many people in our world – we must “touch these wounds”. With technology we are losing touch with the “nearness” of each other, we need to be near to the human hearts, near to the wounds,he urges.

As the session continued into a question and answer platform I noticed how the audience had softened, become engaged and started seeking answers to a wide range of issues. The questions posed showed that they had endowed him with the status of ‘wise man’ and they wanted him to tell them how to solve the world’s problems. The strength of great leaders is this ability to hold the room with the energy of the possible, the magnetism of imparting knowledge that speaks to the heart and not just clever ideology or rhetoric that can create discourse but not deeper discovery.

There were many in the auditorium that were eager to hear more about his relationship with the legendary Czech President Václav Havel. When speaking about his friendship with Václav Havel he expressed a deep love and respect for the man who appointed him as one of his advisors when he became President. Professor Halík speaks of this man who had an ability to really listen and absorb complex intellectual philosophy and be able to distill it into key points and develop it into an enduring ‘story’. This was his brilliant “artistic intuition, the marrow of the bone”. I found that Professor Halík displays similar skills with his ability to really speak to the people with his focused, intuitive words.

I could see how people gravitated towards him in the reception areas, pulled into his magnetic aura, with the desire for meaningful exchange. I realized how starved we are for people who can effectively take on the responsibility to hear peoples souls speaking and offer real words of consolation. We too often find ourselves engaged in superficial small talk unable to push below the surface to find our shared humanity.

The last opportunity to bear witness to his insight was at the conversation on the global refugee crisis. There was a tension in the room. Many political leaders, spiritual leaders and invested public members arrived and wanted to hear the definitive solution to a situation that is complex and desperate.

Professor Halík started the proceedings with a story which highlighted that we are in the night time of humanity where we are unable to see the faces of our brothers and sisters in front of us. We feel only anxiety and hysteria at the perceived darkness.

He posed the question that Europe is afraid that the refugees coming into their countries do not have the same values as the host country. He asked, “What are our common values in Europe? , What is our cultural identity? How Christian is Europe? ”.

Halík says we are living in a post Christian culture. It is not the end of Christianity only the absorption of it and believes there is no way back to the romanticism of the Christendom of the Middle Ages. He stated that is important to rethink the relation between politics and religion. This is where the conversation locked. The crisis of the refugee is cultural, spiritual and deeply political. Politicians are seeking policy decisions to deal with the issue, religious leaders are looking to solutions based on mediation between religious leaders of all the faiths involved and the debate gets polarized. Each sector only looking for solutions in their silos.

Through this division Professor  Halík highlighted humanism, mediation and a healthy relationship between faith and reason. The importance of dialogue was stressed and most importantly he appealed to the young people to come together to change the world, learning to see the world from others perspectives to promote tolerance.

During the week I was privy to a wide range of conversations between Professor Halík and various ‘seekers’. He was called on time and again to be the moral compass, to be the anchor in the storm and the messenger bringing the solution. I can easily see a time in the future where he will be called to play a larger role in the global discourse as a leader able to straddle the complex demands of both statesman and religious leader roles.  He is a natural statesman, a mediator and a visionary.

As an atheist, in conversation with the Professor, I found myself less concerned with my usual burning issues of Christianity versus the secular society. In his company I felt more compassion in me towards humanity and less angry militancy around semantics of discourse, more joy in the possibility of ‘nearness’ to others and less dogmatism around my entrenched ideas.

Professor Tomáš Halík is currently professor of sociology at Charles University, Prague, pastor of the Academic Parish and since 1990 he has been President of the Czech Christian Academy.