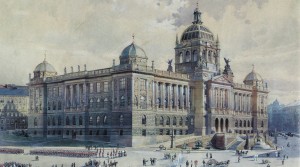 The National Museum houses an exhibition commemorating that the Academy of Sciences was founded 125 years ago. Apart from historic exhibits showing its rich history, the exhibition gives evidence also to contemporary results of several Academy institutes, such as a unique 3D animation of prehistoric people. Visitors can see with their own eyes both of the Czech Nobel Prizes that were awarded to Academy members Jaroslav Heyrovský and Jaroslav Seifert.

The beginning of the institution is connected with the historic building of the National Museum. Originally it was called the Bohemian Academy of Sciences and Art. It was the builder and benefactor Josef Hlávka who had the greatest merit for founding it. Thanks to his  social position and contacts he managed to get the auspices of  the monarch at that time Franz Josef I. Josef Hlávka  provided financial support by establishing “Hlávkovo nadání”, i.e. a charitable trust that has survived until today. In contrast to its present form the Academy did not have the network of scientific departments then but it focused on supporting scientific research and artistic creation.

After the changes connected with the establishment of the so called first republic the Academy contributed to the greatest achievements of the Czech science – e.g. to the discovery of polarography by Jaroslav Heyrovský or to the archeological explorations of Bedřich Hrozný who had deciphered the Hittite cuneiforms. This was also the time when separate scientific Academy institutes were originating. The value of the most important exhibits is underlined by their being placed in dark wooden shelves which symbolize the environment of scientific institutions in 19th and early 20th centuries.

However, apart from such achievements the exhibition also shows valuable original documents which testify how politics and nepotism influenced academic activities even in early times. Thus the Academy remained closed for representatives of the Old Czech policy such as T. G. Masaryk or Jan Neruda. Among those exhibits there is a document where Oskar Nedbal is nominated a correspondent member of the Academy (in 1901). It contains a list of his international merits as a composer and also a world-known violist of the Czech Quartet. But in 1918 his membership was cancelled, which was explained/ justified by the incompatibility of his attitude with the Czech national interests. At the time Nedbal was living and working in Vienna but he had absolutely nothing in common with  the monarchy´s policy.

Another interesting point is the illusion of Zdeněk Nejedlý´s study. He was a musical scientist, historian and also politician who became the director of the Academy after WWII. At that time some Academy institutes were closed and the name of the whole institution was changed to the Czechoslovak Academy of Sciences which Nejedlý started to change according to the Soviet example with great intensity. We can see his identity card, suitcase, desk as well as playing cards.

In spite of various financial and political limitations imposed on it, the Academy achieved significant success, e. g. the invention of contact lenses by Otto Wichterle or launching the Czech satellite Magion into space.

Today´s activities of the Academy of Sciences of the Czech Republic is presented with modern audio-visual media and entertaining form.

The main exhibition is accompanied by another smaller but interesting exhibition called Grammatyka Czeska which shows the development of the grammar books of the Czech language from 16th to 19th century both in books and in digital form. Visitors find interesting information also thanks to the interconnection with QR codes and an electronic study of old grammar books. They can also compare the Czech language to other Slavonic languahes by hearing them.

Venue: The New Building of the National Museum, open till January 10th 2016