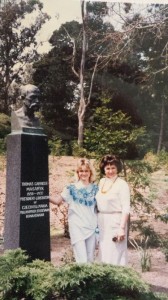 Georgina is the older sister of my mother. After the WWII she married a son of a factory owner (that’s how I acquired an uncle). They knew their lives were threatened when the Communist party grabbed power in Czechoslovakia. At the first opportunity they rushed to the border, bartered their car for a compass and let the almost mythical expert in taking refugees across the heavily guarded border - The King of Šumava, Josef Hasil - take them to Western Germany. After several years in Australia, they moved to their permanent home in California. Forty years passed before they visited Czechoslovakia, again. I was just fourteen years old when I first met them.

My Aunt Georgina and Uncle Edmund lived their lives to the fullest. They devoted their full effort to everything they were doing. They make no secret of their love for the old country. To extending a helping hand to others, supporting charities and founding their own charitable foundations comes naturally to them. With great pride I announce Georgina’s latest charitable action - funding a scholarship for students from Czech Republic, "Teyrovsky Exchange Program", enabling them to study at the Chapman University in Southern California.

When I was eighteen, my aunt and uncle took me under their protective wings. They invited me to California and I spent there a few months, which turned out to be a school of real life. They showed me that there exists an entirely different life then the only one I knew, they told me not be afraid of anything and anyone. It opened a brand new world for me, a scared subject of the Communist Czechoslovakia, it changed my way of thinking, and by that my entire life.

A wide eyed teenager, I'd arrived with one small luggage holding all my belongings. A couple of one hundred dollar bill were warming my pocket, money scrambled together by my parents God knows how. Some of the greenbacks fell victim to a greedy Czech Custom Official; I should have hidden them better. My aunt went over the remaining bills with a critical eye of a businesswoman and asked: "What do you plan to do with this money?" Hearing that I wanted to buy tools and material for my Beauty shop I was planning to open in the future, she said" Well!", took my money and locked it in the safe. (The money stayed there until I was ready to buy equipment for the future Beauty shop. By that time I managed to add some more dollars to my treasure.) Aunt Georgina set the rules: "Bed & board you'll get free, for everything else you have to work." Here and there I found out how hard it is to start from scratch in America, how tough it is to make an honest living.

The next day found me at work around the house, together with the other employees of my aunt. We were paid an hourly wage. To keep track of hours worked, we had to punch the time cards. For the first and last time in my life, I was using the time card, something I have known, until now, only from a Czech movie "Marecku, hand me a pen!"

My first job took me into the garden as a helper to the head gardener Juan. In one of the important tasks we would apply sticks of vitamins to cacti. Two hundred plants were planted there and we had to feed them twice a week to promote proper rooting. Juan instructed me on which types of cacti were edible and which to avoid. Eventually, was able to "promote" myself to more demanding jobs, such as a house painter, and eventually a personal assistant.

We were communicating by our own version of sign language, for neither of us spoke English. My aunt spoke Czech to me, Spanish and English to Juan. After all, to learn the language was the main reason for my being here.

One of the days Aunt Georgina decided I was not making fast enough progress learning the language. So - from now on she and uncle stopped understanding Czech. Whatever I want must be asked for in English. Ha, ha, I smiled to myself. No problem coming up with some trick to fool them. How wrong can one be! They got the better of me. Once, when traveling south by car, I asked them five times, in Czech, to stop so I could go to a toilet. No reaction. Only after I managed to say my urgent request in broken English my uncle stepped on the brakes. The lesson from this story is - when I do not respond to a gentle request, a more forceful way shall work wonders with me. In a month I did understand, in three months I could speak, in six months my mouth was running like a wind mill.

As hard as we all worked we also entertained ourselves with the same intensity. Dinners, theater, interesting visitors, parties filled our daily programs. One day my aunt asked me to dress in light, decent attire, because we were invited by Mrs. Davis to celebrate her eightieth birthday. Who was Mrs. Davis? I did not ask, just did as Georgina told me. A few hours later we parked in the parking place of our celebrant. When the whole fleet of cars parked next to us, it became clear to me Mrs. Davis was no ordinary lady. Sure enough. A huge cake with candles sitting on the table and next to it a singer form the New York Opera belted out an aria from Carmen. Waiters in tuxedos were silently handing out chocolate covered strawberries on silver trays, champagne was flowing freely, smiling guests were milling around against the soothing background of water fountains. Here, thanks to my aunt, I found out how the millionaires celebrate eightieth birthday.

Then the day came when Georgina announced a new destination for our trip: we shall visit Mr. Ingrish. She let me organize the preparation for the trip - what to buy, considering how long a drive I should expect. Several hours passed before we found ourselves sitting in a house on the shore of Lake Tahoe. Here I met the very kindest countrymen I have ever known. Their four dachshunds took an instant liking in me, even the one "invalid", who was missing his hind legs. A clever contraption - wheel, attached to his back, made it possible for him to run around and join the ritual of welcoming the guests. Mr. & Mrs. Ingrish were inspired by my youth. Mr. Ingrish showed me their picture albums. Almost every picture had a story attached to it. "Here is the place where I got the idea of that song," he pointed his finger to a picture of him, standing on the river bank. "What song?" I asked stupidly. "Niagara, of course!" Mr. Ingrish smiled at my ignorance and hit the strings of his guitar to play his greatest hit.

Thanks to my dear aunt I met many interesting and famous people and I wish to all of you, an aunt equal to mine. That's why I want to share my experience with you. The older I get, the more I appreciate having such an exceptional person for my aunt and everything she has done for me is now more important.

Dear Georgina: I wish you the very best, thanks for everything!