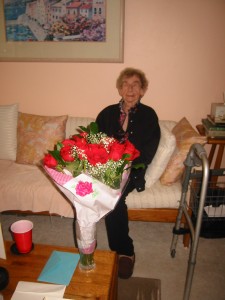 She was born in November, 1th 1920 and studied in Vienna, where her parents acted as teachers. Even at a very young age she became acquainted with compatriot events. She soon realized how important it was to preserve the language as well as national culture. In a foreign atmosphere, it was not easy. After the family moved to Czechoslovakia, Marie studied music,, but even though she became an excellent piano player, she never realized her dream of becoming a professional musician.. In 1948 she emmigrated to USA, to Boston, where she continued in her studies, this time in mathematics.

There, she immeditely joined in the Czech activities.. She reminisced:

,,Most of all they enjoyed my playing and singing the national folk songs. Our activities also had an informative character. We also tried to explain to people what happened in CSR in 1948 and why it had happened..“

The lectures were also attended by Julius Firt, Petr Zenkl, Vojta Beneš (brother of the president) and so on. Marie also had the honor of meeting Dr. Alice Masaryk, who came to Boston..

After finishing her studies at the university, Marie gave birth to two children. As they grew older, she decided to organize a Czech school. They met on Saturdays. Two teachers taught the children words, songs and dances. Among their pupils were also the two daughters of Dr. Erazim Kohák.

Marie stayed an active member of the Masaryk club until 1981, when she moved to California. She settled in San Diego, and again joined in the activities of the Czech organizations.

At the university where she taught, there were three more Czech teachers: Ivo Feierabend (political science), Prof. Kozlík (Russian language) and Prof. Jaroslav Mráček (musicology). They soon became friends and after some time, founded the Circle of Friends of Czechoslovak Music. They organized festivals, lectures on Czech music, and concerts. The symphony Orchestra of San Diego played the entire My Country by Smetana – that was the first time the whole piece had been played in the Western part of USA. It was also there that Rudolf Firkušný, the cellists Miloš Sádlo and František Smetana played, and the composer Karel Husa conducted. There were many others.The Festival was very succesful. They even got financial support of many Americans, who especially enjoyed Dvorak, Janacek and Martinu.

Marie Dolanská was elected director of that organization. Further, she arranged concerts, and as long as her health allowed, until her 90s, she attended the meetings.of the Cultural Association, which also supports activities of the younger generation..

Marie Dolanská (nee Plodrová) lived more than 60 years in the USA and in spite of that she never lost her amazing knowledge of the Czech language and culture.. Her English was perfect. She translated from Czech to English and the other way around with a true feeling for both languages.

It goes to her credit that English readers are able to read the Czech Dialogue. If you take a look at www.cesky-dialog.net for the last more than ten years, you shall find hundreds of her translations as well as original articles. Besides that, she translated into English three books about my travels to Czech communities, (Texas I. and II. and The Great Plains). All that without monetary reward. On the contrary she sent donations to our magazine..

Marie Dolanská pased away March 8, 2014 in San Diego. I was very fortunate that I had the chance to spend time with her at the end of last year and to celebrate with her, her 93rd birthday.

You shall find more details in my next book. I'd just like to add that I was the last audience in the world that she had so beautifully played the piano for..

Marie was for me not only a dedicated, responsible and perfect co-worker, but a personal friend as well. A good, competent, and at the same time a modest woman has left us. She will be permanently recorded in our exile history and in the hearts of those who knew her.  (Translated by Paula Schultz.)

Marie Dolansky passed away peacefully on Saturday, March 8, 2014, at the age of 93.   Thank you all for keeping us in your thoughts and prayers.  In lieu of cards and flowers, if you care to make a donation in our mother's memory, please consider supporting one of the following non-profits:

Marie spent countless hours translating articles for Cesky Dialog, a dual-language magazine (Czech/English) - this organization was particularly near and dear to her heart.  The Dr. Jaroslav Mracek Memorial Fund was established to provide scholarships for students studying Czechoslovak Music at San Diego State University.  Those of you who knew our mother know how proud she was of her Czech heritage and also how much she loved music.  And, all of the personnel at Seasons Hospice took phenomenal care of Marie, assuring her comfort and peace during her final days.

Details regarding a memorial service may follow at a later date.