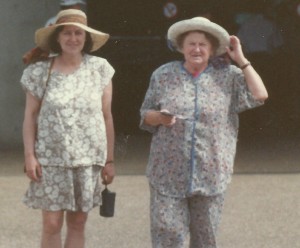 On the 3rd of December we paid our last tribute in the St. Christopher Cathedral in Manuka to the memory of Traudy Kalivoda – our very good friend and a longtime member of our association. Traudy with her beautiful personality was always ready to help everybody. She was famous for her flower decorations and delicious cooking skills applied at our gatherings. We will miss her very much.

We present here some extracts from eulogies of her son Peter and niece Linda, we thank them very much to let us using them.

Traudy, her full name Waltraud Katrina Kalivoda, was born in a small country village in Czechoslovakia in 1926. She didn’t use her middle name, Katrina. So the children didn’t even know she had a middle name until a few years ago when she told them the story about how two local priests visited them soon after they moved into their house in Queanbeyan in the early 1950’s. She said that, being native speakers of English, the two priests found it hard to say the word “Waltraud”, so they asked her what was her middle name and when she told them that it was Katrina, it became “Katrina this” and “Katrina that” with them. Traudy said that whenever she heard them say “Katrina” she always felt as if there was an invisible stranger in the room named Katrina standing somewhere behind her back. Traudy’s father was the local postmaster and by her accounts, she had a fairly happy childhood. Her stories about that time always included animals, mainly dogs that her father bred as a hobby, and a kid goat that followed her everywhere, even to the extent of climbing trees to be with her.

Traudy met and married Bob when she went to work for Bob’s family in their mixed business, a sort of grocers shop combined with an inn. Traudy and Bob escaped from Czechoslovakia when communists took control of the country in the late 1940’s. One of Bob’s stories from that time was that he and his older brother had a factory making souvenirs. The factory employed 25 people, and when the communists took over, the foreman employed by Bob and his brother formed a committee of the factory workers and told Bob and his brother that they could stay on as managers, as long as they took orders from the committee. That was when Bob and Traudy decided to leave the country.

One of Traudy’s stories from that time was that when they were walking across “no man’s land” before crossing the border, a place where they could be shot on sight, Bob walked so fast and took such big steps that she had to run to keep up with him.

After being accepted as refugees in Germany, Traudy and Bob were transferred to a refugee camp in Italy where Peter was born. Not long afterwards they set sail for Australia and like many migrants they ended up in Bonegilla, Vic. after which Traudy and Bob had to go separate ways. Bob came to Canberra where he had a contract to work for the Government for two years and Traudy went to a Cowra hostel where she arrived with Peter in her arms at midnight.

After a short stay in Cowra, Traudy with Peter moved to a dairy farm in Pialligo where they were much closer to Bob who was living in a mens hostel in the nearby Fairbairn Air Base. Bob, in the meantime, had been building a small dwelling in Queanbeyan with every spare minute he had until they moved in and not very long after that, they daughter Margaret was born, and then some years later, their second daughter Karyn was born. By this time, Traudy and Bob had a grocery store in the main street where Traudy worked full-time as well as looking after the family.

Gardening was Traudy’s passion and relaxation. At home she delighted in growing suitable flowers and greens for her beautiful flower arrangements. Also she liked the challenge and managed to grow exotic sub-tropical plants over the years. Just now the “Bird of Paradise” is in full bloom.

Traudy was also a loved and valued member of the Canberra Flower Club. She used to participate in the Club’s activities around the wonderful years of “Flowers and Music”at various Embassies around Canberra. This was the Clubs annual highlight and fund raiser for the ACT Blind Society. Sadly these events are no longer held.

Bob and Traudy were keen to organize on their farm at Ingelara the annual Beseda club’s “A day in the country” picnic with good food, drink and friendship. Traudy loved very much her small garden of fruit trees there and the lovely comfortable little Stockmans Hut.

After Traudy’s severe stroke she had to move to Morling Lodge, Red Hill. In spite of her fragile health, weakness and limited speech she was always happy and smiling and pleased of visits. Just 3 weeks ago she was able to make a short visit home to Fergusson Crescent. She was pleased to see the place she loved and where she had lived so much of her life for the last 57 years. All the family is very glad she was able to come home one last time.