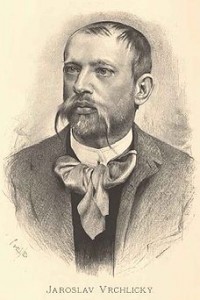 was one of our greatest poets and writers. His poems talk about the greatness and enormity of life – about people of all ages, about nature, animals, weather phenomena, and emotions.

His real name was Emil Frida. To please his parents he studied at a seminary but later he decided to transfer to Charles University where he studied history. After his studies he was employed as a secretary at the Technical University and eventually he became professor of history at his alma mater..

His travels in many countries inspired his poetic output- he was one of our most prolific writers. In addition to poetry, he wrote drama and prosaic works. He also translated many outstanding works from world literature. His favored authors were Victor Hugo, Moliere and Ibsen. All of his work is contained in about 200 books.

His knowledge in many fields was tremendous. He was mostly interested in antiquity, also in the Middle Ages, the Renaissance and in Czech history.

Vrchlicky’s work became known and admired even outside of his homeland.