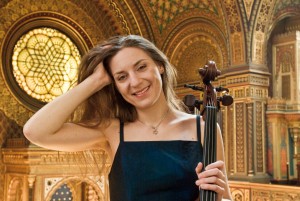 An outstanding young cellist will play with the FOK orchestra under the conductor Serge Baudo on April 10. and 11, 2013 in the Smetana Hall of the Municipal House in Prague. Miss Hoskova had already performed many times with her father, cellist  Jiri Hosek for our International Czech Club.

The program of the evening will consist of the overture to the opera Beatrice and Benedict by Hector Berlioz followed by the wonderful concerto for cello (e-minor), op. 85 by Edward Elgar.

The second half of the concert will present Stabat Mater by Francisco Poulence. Soloists will be Olga Jelinkova and the Kuhn mixed chorus.

Do not miss this unusual opportunity to hear outstanding music under Maestro Serge Baudo.