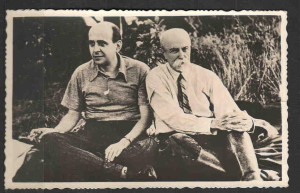 Early in the morning on March 10, 1948 the employees of the Cernin Palace in Prague found the dead body of Jan Masaryk on the pavement under the windows of his apartment. His nation was gripped with fear and horror! How could this have happened? After all, he was the son of the first president of Czechoslovakia Tomas G. Masaryk. He was beloved by all ,  well known and popular all over the world, especially in the USA as his mother was an American! Everyone knew that this was  definitely the end of democracy in Czechoslovakia, perhaps forever. The police investigation did not bring any clear answers. The communists declared his death immediately as a suicide. But almost nobody believed that. We did not find out any more even twenty years later- in 1968- and the circumstances are still not completely clear because some of the documents are somewhere under lock and key.

Several books were written about Jan’s death. His friend Marcia Davenport wrote her story in “Too Strong for Fantasy.”  Claire Sterling described the investigation in her book “Case Masaryk.”

Viktor Fischl, writer and Jan’s friend, wrote:” Jan Masaryk was an infinitely many- faceted colorful personality. He knew how to unite contending elements and ideas. He was always looking for a common denominator. He was able to translate everything, even the most complicated topics, into simple language that everyone with common sense could understand. He was a statesman who was not a member of any political party. A man who could explain the West to the East and vice versa. I really think that there were very few people in the world who could utilize common sense as well as Jan Masaryk. This was his greatest strength. Also  his inimitable sense of humor and  his warm humanness. Because of these qualities even his political adversaries could not help but like him. I even heard many communists talk about him with respect. He never got really angry. He could disarm anyone with his smile and he was able to arch over the most embarrassing situations with a joke. He knew a lot of people and he understood them because he loved them. He worked for his people and I believe that he also died because he loved his people.” *

He used to say:” Truth prevails but I takes a lot of hard work.”  And he worked hard for truth all his life.

Did we Czechs learn anything during the last sixty-five years? Do we embrace truth and love now?

I imagine that  two great democratic thinkers met recently somewhere in the Czech heaven: Jan Masaryk and Vaclav Havel.  They both understood the importance of truth and love. And they practiced these values in their lives. Now they are  out of reach of human ridicule, slander and hate. They will certainly enjoy talking to each other because they had lots in common and they fought for the same principles. May they rest in peace!