Immigrants from the Domazlice to Nebraska 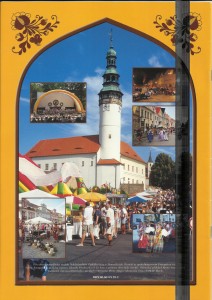 It was a special day in Zahorany near Domazlice. Josef Pabian was awaiting some guests from abroad. His wife Mariya was busy preparing dinner for everyone and the youngsters were reviewing their school English in the yard.

The guests arrived! They were Joan and her husband Thomas Hruza from Nebraska. After a tour of the farm they sat down to eat. Everyone had lots to say and to show many photographs. The guests told everyone how Czechs in Nebraska value their heritage. At the University of Nebraska the  Czech language has been taught for the last 105 years and the Czech club Komensky publishes its own journal called Cesky svet.  There is an article in the journal encouraging seniors to will some of their estates to the Foundation ( started in 1993) whose purpose is to support the preservation of the Czech language and Czech traditions.

The motto of the Czech Club are Komensky’s words:” All of us are citizens of one world. It is wrong and unwise  not to like someone just because he was born in a different country, or that he speaks another language or that he has a different opinion regarding various issues.” What a timely statement for our present day situation at home!

The guests brought  colored t-shirts for everyone and also other presents. Then the whole family drove to see the Kouty castle and the local cemetery.

In 1868 a “colonization club” called Ceska osada was founded in Chicago with the purpose of finding suitable areas for future Czech immigrants. The northwest corner of Nebraska seemed to be most appropriate because the state gave a large part of land to the railroad builders who, in turn, sold parcels to individuals. Many people from western Bohemia decided to immigrate, including 11 members of the Josef and Jana Pabian family who came here in 1876. They hoped to improve their living conditions because in Zahorany the family consisted of 18 people who had only one cow and one goat.

They sailed on the ship Helvetia and the trip took 4-6 weeks. They slept below deck in quarters which had no windows and no beds, just straw on the floor. Other people from Zahorany were Martin Havel, Martin and Jan Svacina, Jakub Kohel, Matej and Jiri Hynek and Josef Anderle and others.

A Bartos Bittner from Milovec became a Czech- American writer who died in Chicago in 1912. In 1870 a large group of Czechs from Domazlice arrived led by Vaclav Randa who later became a prominent politician and official.

The newcomers to Nebraska were very surprised by the harshness and bleakness of the land. They found themselves in a prairie with no trees, no wood, no water. The few dollars that they had brought with them were spent to buy some oxen, wagons, a plow and to pay a down payment on a piece of land. They built their dwellings out of dry surf supported by twigs; the roof was made of grass mixed with willow twigs and covered with  a clay mixture. The dwellings were usually built into a slope so that the inside would be better protected from water in the rainy season. Wood for building any kind of housing was found only near rivers and brooks. The nearest neighbor was usually miles away. And besides he spoke a foreign language.

The Czechs worked extremely hard to succeed. Learning the new language was hard for the adults, the children had an easier time, but even they had to help with the work in the fields.

The immigrants also had to get along with other neighbors- the Pawnee Indians. Those were a rather peaceful folk who occupied themselves with  hunting and growing corn. However the newcomers had to be careful of other neighbors- white people- who often tried to deceive them or cheat them. Their lives are very well described in the novel My Antonia written by Pulitzer Prize  author  Willa Cather. The book was made into a film and has been translated into many languages.

It so happens that Cindy, the daughter of Joan and Thomas Hruza, now owns the house where Willa Cather used to spend her summers with her sister Theresa before her death in 1947. The house of Thomas and Joan Hruza is also famous because a party was held here in honor of the Czech ambassador (my colleague) when he visited Nebraska.

Jan Pabian built a forge and a machine shop  in a little town called Praha in 1893. The community grew very quickly once a railroad was built in the “Czech” Saunders district in 1887.

In 1897 Jan Pabian built a car called Pabian Car- one of the first cars made in Nebraska.

It had a one-cylinder engine placed in the rear of the car. Its maximum speed was 15 mph and the driver had to stop every two miles to add oil. In 1969-29 years after Jan Pabian’s death- the car was moved to a private museum in Holland. It still shows the skill of a man who learned his trade in Domazlice and who also helped to build America.