The Most Famous Czechs? 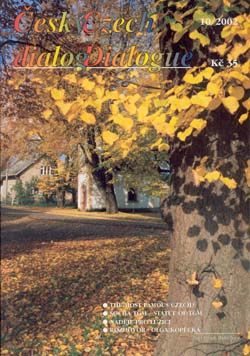 One day I am wandering the streets of Manhattan close to the National Building and I stroll onto 75 East Street. My attention turns toward an African-American boy, who is dragging a plastic cow across the pavement. It is most likely a marketing display model. "Hey, can I take a picture?", I ask him. "Why not.", he answers. As I am posing with the plastic cow by my side, I notice a sign on the building: Jan Hus. "Unbelievable", I think and then I roll my eyes. He notices and with proud knowledge he states: "Jan Hus was a preacher. From Bohemia. He was burned because of his beliefs. If you want, to you can go inside for a tour of the church." That I did for sure, which was already described in places and which will certainly be described in my book about the United States of America and our own nationals.

I was reminded of this incident when I read an article in Mlada Fronta Dnes dated the first of October. The Center for Research for Public Opinion did a study with 1200 people and raised the question "Who is the most famous Czech?" and the results were the following: In first place was Tomas G. Masaryk (65.3%), in second place was Charles the Fourth (39.8%), in third place was Jan Hus (35.2%), in fourth place was Vaclav Havel (27.3%), in fifth place was Jan Amos Komensky (24.9%). After that follows: Jan Zizka z Trocnova, Antonín Dvořák, Václav Klaus, Jaromír Jágr, Karel Capek, František Palacký, Dominik Hašek, Karel Gott, Alexander Dubček, Jaroslav Heyrovský, Milada Horáková, Božena Němcová, Vladimír Remek, Jiří z Poděbrad, Sv. Václav, Jaroslav Seifert, Jan Masaryk, Karel Havlíček Borovský, and other current and not so current historic and cultural personalities. Research was based only on citizens of the Czech Republic. It would be interesting to know which personalities are known abroad and in which order they would be represented. Reader(s), wouldnít you like to join this research project? Not just your opinion, but also your neighbors or friends opinions. If you respond in the foreseeable future by sending an e-mail, fax/letter, we will print the results and we will give 10 winners of our mini-lottery each a book, tape or CD.