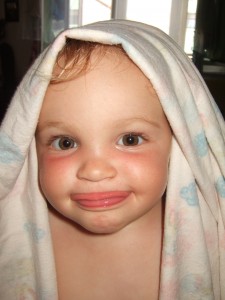 It is the first of January. I do not subscribe to the usual prejudice about the number thirteen. I like this number. On May 13 of a certain year I gave birth to a beautiful little girl, and about two years later- on February 13 I brought a good looking little boy into the world. My third child also wanted to wait until the 13th of January, but the doctors did not agree and induced its birth so that it was born two days earlier. It was a hard labor, because the baby was pretty large, over four kilograms and it showed no desire to be born because it waited for the thirteenth of the month. This boy will soon celebrate his birth – he will be as old as Jesus was- and I am deciding whether to celebrate the day on the eleventh or on the thirteenth of January. The number would have s number three in it, actually twice= and my number is also three- I occasionally play around with numerology…

I hope you will forgive me that this time I will leave out all political cabarets. I am still full of the Christmas spirit and I do not want to spoil it. Venda Sebrlova will write about politics. I recommend that you look at our web page (www.cesky-dialog.net), Category “Interviews”, where you will find some thoughts of one of the wisest men of the land, Mr. Zdenek Mahler. One of the pleasures of every day is to listen to Czech radio, channel 2 at 8:30 A.M. It is such a relief to hear reasonable and intelligent personalities talk about current issues. Therefore I am taking the liberty to put some of their thoughts on our web pages  and/or to include their own web pages.

Zdenek Mahler once said about me that I was an apostle.  It was at the very beginning when we started to publish the Czech Dialogue.  I was then full of energy and good intentions to establish connections between our people living in various countries of the world. I was  very naïve and had no idea what such work would involve. However, I am not sorry. I believe that each  person is in the world to learn and to accomplish some meaningful task.  I let others  judge how much I have accomplished. During those last twenty two years I learned a great deal. First of all I learned to be patient, to understand other points of view. I also learned to be persistent, to follow my goals,  not to be discouraged by failures, to be satisfied to live in modest material circumstances.

Dr. Mahler talks about missing values in our present society where  money became god. He also talks about Czech history often difficult and unsettled but simultaneously strengthening the nation. He talks about Masaryk and of his legacy, also about hope that is in human spiritual abilities, about inventions and ideas.

Recently I met with my friend of many years who is a physician.  He asked about my health and also about my financial situation. “Are you asking me whether I have any savings in the bank?” I wanted to know. “ Why should I and for what?” He said:” Actually, you are right- you have a place to live, you have a roof over your head, you are not hungry or thirsty…. Many people do not even have that.”

And I added:” I have many children and grandchildren, good friends at home and abroad, I am a lucky person. And so I wish all my dear readers a happy year with the lucky number thirteen.