How was the Sokol slet 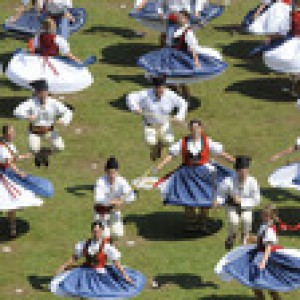 It was wonderful as were all the other slets - it starting with a parade from St. Wenceslas Square through Narodni trida to the Old Time Square…

People are close to each other and all  share the joy- there were  more than 15,000 of us! The program during the following days was rich and colorful. There were small children (the youngest child was 2) performing with their parents, followed by school children, teenagers, and finally came the seniors (the oldest participant was 92 years old). The first evening program was at the Vrsovice Eden ( which is now called Synot Tip Arena) and it was done during pouring rain.!  But the gymnasts performed anyway. They spent many hours training for it and they exercised with gusto even though their hair and outfits were wet.

First the seniors performed a show called “Just for Today”. The authors Blanka and Lanka Kosmichova used various populat songs  from Czech movies as accompaniment. The gymnasts were dressed in white tops and blue pants or skirts. It is almost  unbelievable that they could produce such a creation coming from various parts of the world. Later they told me that they did not mind the rain during their performance at all, because it was a warm shower!

Next came younger school children with a composition called Jonathan followed by many other groups. They are described on the website www.sokol.cz. The composition “Chlapaci” ( Strong Men) was very much admired, especially by women.

I especially enjoyed the composition Ceska suita( Czech Suite) performed to the music of Antonin Dvorak for women of all ages. It was created by Eva Cihakova, Eva Ornstova-Velinska and Vlasta Tresnakova. I considered this number to be a really artistic part of the whole event even though the entire Slet was great.

I also liked the gymnastic  performance at the Old Time Square, at the Tyrs House- all done in very hot weather. Most of the participants seemed to had come from Denmark. It was interesting that these were called “Jumpers”( which they really were), while at the Eden they were referred to as “rope skippers.”

The Friday performance was similar to the previous program presentations.. The final evening at the Tyrs House  presented various other “jumpers”, also Snow White and the Seven Dwarfs, and “Grannies  as Witches from Petrohrad.” It was a great conclusion for a meeting of wonderful people from the whole world who were able to create an atmosphere of friendship and belonging.

It is a shame that our state did not devote any attention to such an unusual and positive event. Even though the President declared himself a sponsor of this happening-he did not attend even a single  program. Public television which is paid for by us, citizens, did equally nothing. Just the sport channel ct4 broadcast the main programs and will hopefully have them in their archives.

Again we  saw the usual result- what the people produce and pay for with money, time and energy- that works. What the state does is for nothing, it even turns out to be harmful.