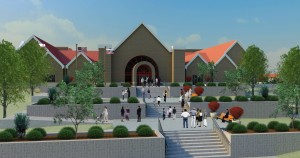 With just five weeks remaining until the grand opening of the National Czech & Slovak Museum & Library, officials announce the details of an exciting, fun-filled two-day festival to celebrate the new museum and library on Saturday, July 14 and Sunday, July 15.

“We are throwing a big party for the people of Cedar Rapids and Iowa, along with members, friends and Czech and Slovaks across the country,” said President/CEO Gail Naughton. “We want to come together to celebrate our grand recovery and remember and rejoice in what we have accomplished in just four years, one month and one day since the flood.”

The opening will include the premiere of three new exhibitions: the blockbuster, “Alphonse Mucha: Inspirations of Art Nouveau,” that will continue through Dec. 31; “Weird & Wonderful: Award Winning Art for Children’s Books,” an exhibit from Slovakia featuring 73 Biennial of Illustrations Bratislava (BIB) award-winning children’s book illustrators from around the world. The colorful, whimsical artworks, which will charm the young and young-at-heart, will be on display through Oct. 7.

For the third new exhibit, textiles that were damaged in the 2008 flood will return to the National Czech & Slovak Museum & Library. Painstakingly restored at the Chicago Conservation Center, richly embellished folk costumes (kroje), scarves, ritual cloths and household linens will star again in the exhibit, “It All Comes Out in the Wash.”

“When the flood hit, we thought we might lose the immigrant home and watch it float down the river in pieces. But surprisingly, the 130 plus year old structure survived intact, in part due to the solid construction and strong plaster walls, but I suspect in most part due to the skill of the builders so many years ago,” said Naughton. The home where five generations of the Sleger family lived has always been a favorite among visitors.  In the fall of 2011, the Sleger home was moved closer to the expanded building and completely restored to the 1900 time period.

Along with touring the exhibits and the building, visitors may listen to several speakers inside Heritage Hall including John Mucha, grandson of Alphonse Mucha; Tomoko Sato, curator at the Mucha Foundation; artist Sonya Darrow of LadyFits discussing folk dresses; Vít Hořejš of the Czechoslovak-American Marionette Theatre of New York and Jerry Patzwald discussing the history of Staropramen, a Czech beer. Films about Mucha and the building’s monumental move will be showing in the new theatre.

On the terrace, Babi’s Bakery, sponsored by the National Czech & Slovak Museum Guild, will sell koláče and other ethnic baked items. For youngsters, a creation station will begin at noon in the new classroom. Children of all ages may create a variety of make-and-take crafts.

Saturday, outdoors on the museum grounds, visitors will find a host of entertainment and cultural activities. The concert stage will present the “Czech Plus Band” and the “Craig Erickson Band” featuring Natalie Brown, followed by the headline event, “Caravan of Thieves” from Connecticut at 7 p.m.

The outdoor amphitheatre will feature six authentic folk dance troupes from throughout the Midwest. Visitors will enjoy a hog roast with all the fixings, plus beer, water and soft drinks, all of which will be available for purchase. A grand finale of the evening will be a colorful, custom-designed, illuminated video covering the entire front of the building beginning at 9:45 p.m. Created by Matthew Kluber and John Richard, with technical support from Sound Concepts of Cedar Rapids, this original show set to the music of Smetana will celebrate the renewal of this important cultural landmark with images, text, light, color and sound. The title of the work is “Nesmírnost” (Czech and Slovak for immensity), for the immensity of the flood and the immensity of the spirit, determination and effort to rebuild and renew the National Czech & Slovak Museum & Library.

Sunday, activities begin with a building blessing featuring clergy from six area churches that have been historically associated with the Czech and Slovak heritage of the city. Attendees are encouraged to bring a flower to place near the building and, after the blessing, guests may take a different flower home. The day continues with Babi’s Bakery, creation station for children, ice cream social, children’s activity tent and a food and beverage tent featuring hot sandwiches. Bohemian swing vocalist and musician George Grossman of Orlando, FL will perform on the concert stage.

The day’s highlight event will be two performances of “The White Doe” by the Czechoslovak-American Marionette Theatre at 1 and 3 p.m. in Heritage Hall. Based out of New York City, this theatre group performed at the first grand opening in 1995.  Two foot colorful puppets will entertain both youngsters and adults alike. At 5 p.m. the festival and museum close.

A large-scale video projection set to music will illuminate the front of the National Czech & Slovak Museum & Library at 9:45 p.m. on Saturday, July 14. The video will celebrate the renewal of this important cultural landmark with images, text, light, color and sound. Titled, “Nesmírnost” (the Czech and Slovak word for immensity), the work represents the immensity of the flood and the immensity of the spirit, determination and effort to rebuild and renew the museum and library.

“We didn’t want to do a round of fireworks just 10 days after Independence Day, so the idea of a giant light show on the entire face of the building was much more exciting to us,” said Diana Baculis, marketing and communications director.

Matthew Kluber and John Richard created the video, with technical support from Sound Concepts of Cedar Rapids. Richard, a native of Iowa City, began his career as a photojournalist and has now shifted his focus toward film and video production.  His work has appeared in numerous publications including Slate.com, USA Today, The Washington Post, and ESPN. He is currently working in collaboration with UNESCO and the University of Iowa to produce a documentary about the history of literature in Iowa City.

Matthew Kluber has exhibited his paintings/projections, films, and drawings at galleries and museums including: the Museum of Contemporary Art Shanghai, China; FOCUS09/Art Basel, Switzerland; the Micro Museum, Brooklyn; Klein Art Works, Chicago; Dolphin Gallery, Kansas City; the Austin Museum of Art, Texas; the Grand Rapids Art Museum, Michigan; the Bemis Center for Contemporary Art in Omaha; the Des Moines Art Center. He holds a BFA from the Rhode Island School of Design and a MFA from the University of Iowa. He is a fifth generation Cedar Rapidian of Czech heritage; he lives in Cedar Rapids and is an associate professor of art at Grinnell College.