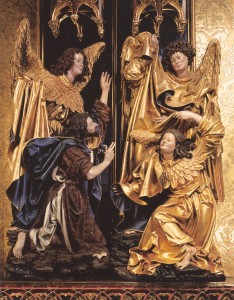 The Central Bohemia Gallery in Kutna Hora ( Galerie stredoceskeho kraje Gask) will open an international exhibition entitled Europa Jagellonica- The Arts and Culture of the Jagellon dynasty (1386-1572). The exhibition will be open from May 20 to September 30, 2012. The town of Kutna Hora was chosen because the first king of the Jagellon dynasty Vladislav II.was elected Czech king here in 1471. The theme of the exhibition is “Silver Mining and Art Around the Year 1500”. The town of Kutna Hora was since the 13th century a royal treasury from which many future buildings and projects were financed.

About 200 unusual artistic creations will be exhibited. Similar programs about the time of the Jagellon dynasty will take place in other communities in the Czech Republic.

The exhibition will move in October to Warsaw where it will remain till January 2013 and then move to Potsdam, Germany.