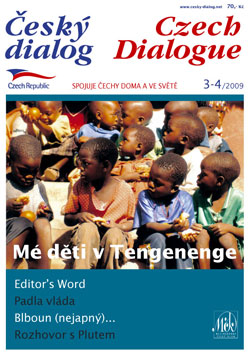 This time I wanted to write something positive, but I keep thinking constantly about negative news - in spite of the fact that I do not buy newspapers and do not watch television.( Well, I must admit that I listen to the radio.). But even there the announcer said today that we should not believe everything that is said on the radio or on television. A psychologist explained that each one of us has also some' lower' instincts. And that is why thousands, even hundreds of thousands of people do not buy a good quality newspaper( maybe such papers do not even exist at the various news stands). Instead, people buy the tabloids where they read in huge letters that: Gott-Vondrackova equals WAR, or that Svobodova has a new lover, or that another movie star lost her unborn baby!

Today a fellow at the news stand asked me what newspaper was the best. Ha, ha, none of the ones that are being sold. Yet things ARE HAPPENING, but they are reported in watered-down way , like tea made from a used tea bag. It seems that the reporters are working under some kind of a scourge which instructs them what to write, or for what they will or will not be paid, or what they should write so that the paper will sell. Yet I have my own resources of news which are far removed from the ones reported in the press.

It seems to me that everyone in our society- whether employed in the media or elsewhere - is simply AFRAID of something- not to anger the boss, not to lose his job, not to be shot at while attending a christening or some other public gathering- who knows? But I know that when people are afraid nothing good can come of it. Fear leads to more enslavement, to more oppression , to more hating the "rich and powerful"- and finally… to submission.

All the time- day and night- we hear from the media about the crisis- in the USA, in the Czech Republic, in the whole world- yet every morning I see people going shopping for the usual things- bread, rolls, milk and something extra. Today I heard a "poor man" on the radio complain that he lost his job and that- before he could find another one - he might have to sell his car just when he was planning to buy a new one. There followed a long discussion on the subject- would the "poor man" die if he had to sell his car?

I don't know whether such fellows as this car owner ever think about people in other parts of the world. For example about Chechnya, where the Russians murdered thousands of mothers and children and destroyed whole cities? Or about African hungry children with bloated stomachs, or about Arabian boys who are being taught from infancy by terrorist maniacs how to handle weapons and how to carry explosives on their bodies?

"Leaders" in our country and elsewhere came up with a miraculous solution of the economic crisis: Let's reduce the prices of cars- people will buy more of them and thus more cars can be produced …

But I and many others do not want another car- we don't want any car at all… It appears that the crisis is not of economic, but of human origin.

P.S.: Is there anything positive to report? Yes- that the world is still full of wonderful people.