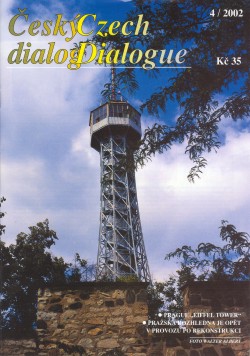 New research by an expert in criminal biomechanics provides new evidence that Jan Masaryk, the son of the first Czechoslovak president T.G. Masaryk and the first post--World War Two Czechoslovak Foreign Minister, was murdered in 1948 when his body was found below the window of his flat.
The author of the study, PhDr. Jiri Strauss, a member of the Czech Academy of Sciences, expert court witness, and lecturer at the Police Academy, is in no doubt. "Some form of external force was applied to Masaryk's body," Strauss told Czech paper Mlada fronta Dnes in March. "Someone must have shoved him -- no other external force is possible," added Strauss.
Suicide, "Accident", or Murder?
There have been three competing theories of Masaryk's death. The first is that Masaryk, who at the time was Foreign Minister -- and token democrat - in the Communist controlled government led by Klement Gottwald, was overcome by depression at the situation in his country, and committed suicide. This was the verdict given by the inquest and officially upheld throughout the Communist era. Masaryk's two personal secretaries, Lumir Soukop and Antonin Sum, were both convinced of this theory. "A spiritual murder -- yes. A physical murder -- no," Soukop said in 1968, when the case was re-opened. According to Soukop, when Masaryk was informed of Gottwald's summons for him to come to parliament half an hour early, Masaryk responded: "Sure. I'm not going there any more."
The second theory is that Masaryk fell to his death when trying to escape from Czechoslovak and/or Soviet secret police agents. The Office for the Investigation of Communist Crimes (UDV), set up after 1989, concluded that the most likely version was that Masaryk fell when fleeing from five agents, probably Czechoslovak "partisans". The agents, who on orders from the General Secretary of the Communist Party, Rudolf Stransky, had been sent to search Masaryk's flat, humiliated and beat him up, and when Masaryk attempted to flee, he tragically fell to his death.

Murder Most Foul
The new twenty-five-page study gives new ammunition to the many who have never been in any doubt that Masaryk was tossed to his death on the orders of the Communist leadership, who were afraid that Masaryk was a potential figurehead for anti-Communist resistance. The study draws on three kinds of evidence -- the protocol of the post mortem, technical calculations relating to the fall, and documentation from the immediate scene of the crime investigation. "I did not take into account any interrogations or eye witness statements. I need clearly documented, undoubted facts on which to base my calculations" says Strauss, who adds that, while aware of the significance of the case, "I didn't care if it was Masaryk or Mr. XY, for me it was a fall of a human body."
The documentation shows that Masaryk was found at least 220 centimeters from the wall of his flat in the Cernin Palace. However, according to Strauss, if Masaryk had jumped himself, he would have landed around 70 centimeters from the wall. "Masaryk, an untrained office worker, could not, taking into account his weight and height, have jumped so far," says Strauss.
Moreover, the post mortem protocol enabled Strauss's team to decode how Masaryk fell. Masaryk's legs took the primary impact of the fall, but his body maintained a perpendicular position during the fall, meaning that his head remained undamaged. However, according to Strauss, in cases of suicide the body inclines to some degree, meaning that the head must hit the ground. "They [unidentified assailants] pushed him in the body's centre of gravity, which meant that there was virtually no rotation of the body during the fall. Masaryk tried instinctively to fall on his legs. From the point of view of biomechanics, such a fall is advantageous for the chance of survival. You break your legs, but survive...Masaryk had the bad luck that during the fall he suffered heart failure," says Strauss.
The study is the first to investigate Masaryk's death from the point of view of biomechanics. Pavel Bret of the UDV says the UDV regards the study not as definitive proof of one of the theories but as one basis for further investigation. "We still need to question some more people both in the Czech Republic and abroad and we would also like to get some documents from the Russian archives," says Bret. However, the long time that elapsed from Masaryk's death until the UDV's investigation probably means the full truth will never be established and almost certainly that it is too late to bring those responsible to justice. In 1995, the UDV announced that it had identified two of the five "partisans" suspected of being in Masaryk's flat at the time of his death. However, one was senile and no longer able to communicate, while the other, Vilem Krajcirovic died in 1994 after a gas explosion at his home in the United States.
Masaryk's last personal secretary Antonin Sum remains convinced that Masaryk took his own life. "It was self-sacrifice. Masaryk wanted to rouse the West's attention to what was going on in Czechoslovakia after February 1948," says Sum. Strauss stands 100% behind his study. "I would put my head on the block that it is correct," says Strauss.
Moreover, the following article by Jaroslav Kubicek, which appeared in Czech in the last issue of Czech Dialogue, indicates that Masaryk's mood in 1948 was not as black as some have painted it and far from suicidal.