Editor’s Word - The Conscience of Europe and Communism 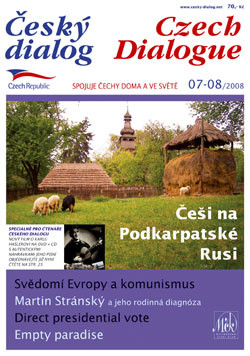 The initiators were Jana Hybášková (EU) and Senator Martin Mejstřík.

The inaugural invitation was presented in these words:

Communism is a common legacy of Europe, same as Fascism, and Nazism. Not until Europe accepts this fact, of a common past and deduces from it a common responsibility, will it be unified.

The Conference was opened by the former president Václav Havel and then came forward a whole range of personages not only from the states in Europe but from Canada and USA as well, offering challenging and rousing reports. The Conference was splendidly prepared including its voluntary programs and social gatherings. You may read the Declaration from the Conference in Czech or in English on pgs. 8 and 9. The event had only one minus, but it was rather to its credit. It clearly showed how appropriate its contents were. Interest of the media was minimal. Aside from the Czech Radio that had broadcast a range of interesting interviews and information, there was hardly anything about the Conference in the newspapers (not to even mention TV). Of course the newspapers are full of more exciting stories of abused children, murders and fraud which often awaken in readers the lowest instincts. – This reminds me of something. Read the next paragraph.

On June 18th I received a text message from a friend telling me to go and buy the Halo tabloid that Mr. Kojzar is writing gossip about me. Halo is a sleazy paper even worse than the Rudé právo used to be years ago. Kejzar had always been a journalist who hated everything non-communist, a journalist feared by everyone even for example by young “rockers”. Whomsoever he slandered was lost.

However, this news made me happy. So now I could sue the tabloid for slander! I would ask for a million. That would sure come in handy and pay my debts at the printing house.

I felt a little self-conscious entering the newsagent’s since I had never before bought papers of that kind. My feelings were correct. “We don’t sell that kind of papers!‘ blurted out the salesman. I thanked him and congratulated him on his good taste and went somewhere else... What a disappointment! When I finally bought it and started reading the article, I realized that suing was out of question. That Kojzar had actually made quite a nice promotion for us! He quoted several passages from our first double issue of this year adding a few comments, which proves that he surely must be a Senile Comrade. He gives as a model the communist writer Jan Drda, who in 1968 after arrival of the Russian tanks threw his Red Party book at the feet of his Red party bosses.. Because of that he was shortly fired from his Editor-in Chief position at the magazine Svět práce. A year later, I was present at his funeral. So many dissidents would not have attended this event, had he been such a perfect model of the Communist Party.

So let our Aged Comrade write whatever he wants, since there are probably still people who read such nonsense. – Well, that’s the marketing mechanism for you ...

I have received some very nice letters in response to my announcement concerning the end of the magazine. Most readers feel sad but understand. Some even offer financial help.

So my dear readers, I wish you a beautiful summer or winter if you live in Australia or South America. I look forward to the next dialogue.