The Interview with Thomas Hasler 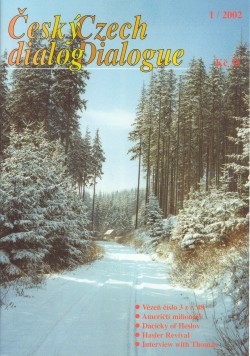 What wos on your mind during the concert in Prague? -- The concert evoked a range of emotions. First and foremost I appreciated the opportunity to tell my story -- as I said, the Czech public doesn't know that my mother and
I exist. The recent Czech TV series provides good evidence. I also appreciated the opportunity to highlight my father's political songs and his activities during World War II, which led to his imprisonment and death.
That aside, I had two other important experiences. I met for the first time members my father's first family -- the family of Gino Hasler. I've been in touch with his son in California, but hadn't had a chance to meet anybody from that side of the family. In fact Gino said that his mother wanted to meet me in Prague, but she apparently died shortly before the concert. I haven't had the sense that Gino's family is doing anything to promote my father's memory.
I also enjoyed meeting Hilda, who is remarkably sprightly for her age.
Where do you want to go from here after having been to the concert named after your father?
-- A number of years ago I thought that my father should have a memorial in Prague. In fact I asked the then mayor of Prague, who was visiting Washington if there was any memorial to my father -- he said there wasn't. I started thinking about a "living" memorial in the form of a cultural festival. The initial focus was the Czech-German-Jewish cultural world of pre-World War II Prague, as an example of tolerance. As I did further research I discovered that there is no memorial to the non-Jewish victims of the Nazis, so expanded the festival concept to eventually include all the victims. My father would fit among the political victims. The Dec. 9th concert is a modest beginning for these plans. There may also be a concert in conjunction with the June anniversary of the massacre at Lidice.

Can you tell us something about your jobs -- past?
-- My early career was in journalism -- I have an M.A. in journalism from the University of Michigan. My first job was an internship on the only English language newspaper in Beirut, Lebanon. Most of my journalism career was at the Baltimore Sun. In recent years I've been involved in electronic publishing ventures. Most recently I've been a partner in a company that was asked by the head of research for Europe, at McKinsey & Co., a top global management consulting firm, to create prototypes of business intelligence systems. This slowed down because of the recession, so now we're talking to the U.S. intelligence community about a system to monitor terrorism around the world.

When did you find who was your father? How did you feel?
-- My mother told me about my father as I grew up, but I didn't care much about him. I knew vaguely that he was a historic figure, but I wanted to assimilate and get on with my life. As I said before, I first saw him move and show emotion on a movie screen in New York in 1990. My first emotional contact was when I saw the film "Pisnickar" in Pra gue in 1993, and heard "Ceska Pisnicka" for the first time. Without understanding one word of the lyrics, the song went right to my heart. In the last few years I've been making up for lost time, and spending increasing amounts of time re-discovering my father, and working to promote his legacy.

Why didn't your mother speak about your father?
-- As I said, my mother told me something about my father as I was growing up in Australia. Later, when I started asking questions, she said that talking about "old times" was too painful. I found that the best way to approach the issues was to ask indirect questions, and then hope to spark a memory. Towards the end of my mother's life I found the memoirs that she had secretly written, and they prompted new questions.
Since she died I've found further documents, which led me to hire a researcher in Prague to go through the archives. During my visit to Prague I spent a day with the researcher going through the files at the archives. Among the interesting discoveries:
a) My father had a Jewish partner in his music store, and was denounced for defying the Nazi laws. The partner left the business in 1940.
b) My father needed a license each year to operate a cabaret, and this provided a mechanism for the government to censor his songs, even in the 20's!
c) My father liked to drive fast, and received many speeding tickets.

Is there something you would like to tell to the public?
My father was a very brave man. Even though the Gestapo was watching he dared to be active in the underground, sing songs satirical of the Nazis, and fall in love with a so-called "German." I think he set an example for contemporary Czechs by differentiating between National Socialism and "good Germans." The Benes Decrees are an example of how Czechs bundled all Germans together. Many Czechs have not been willing to make the distinction even years after the war, witness the film made about his life in the 60`s, and the Czech TV series made in 1997.
The creative environment out of which my father came showed that before World War II Prague provided an example of tolerance which was rare at the time. The Czechs have much to learn from that time. Tolerance continues to be a challenge for many societies, not just the Czechs. Perhaps a cultural festival can help people understand through creative expression that people of various societies have much in common, no matter how big the differences seem on the surface.
Thank you very much for your answers.