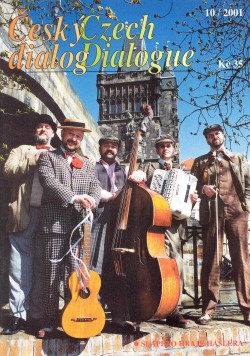 The Rev. Mr. Rokos was born in Chicago, Illinois, the youngest child of George Washington Klecka Rokos and Dorothea Wildason Rokos. He was but a few months old when the family returned to Baltimore where the family roots in America were. Mr. Rokos has degrees from the Baltimore Polytechnic Institute, The Johns Hopkins University and the Virginia Theological Seminary. He has served in a number of parishes of the Episcopal Diocese in Maryland, and is currently priest-in-Charge of Deer Creek Parish, Darlington Maryland. He has had extensive training in substance abuse counseling and is a practicing substance-abuse counselor.
On Mr. Rokos' paternal side, he is 100% Czech. His paternal grandfather was Gustav Ladislav Rokos whose family resided in Vilemov near Caslav in the Czech Lands. Gustav Rokos was an officer in the Austrian Army, but an ardent Czech nationalist, like the other members of his family. Like many other Czechs, he and his family emigrated to America and established businesses that flourished in the then thriving Czech-American community of Baltimore. In his youth he recalls stories of his family's role in Czech affairs from as far back as the 1860s. He has continued that tradition, serving as president of Cesko-Narodni Hrbitov since the early 1980s. This organization is chartered not only to run the community cemetery, but to preserve Czech culture in America as well. He is a member of Sokol Baltimore as was his father, both grandparents and his great-grandparents. Great-grandfather Josef Klecka served as president of Sokol Baltimore, and paid for the construction of the second Sokol Hall in Baltimore. For the last six years, Mr. Rokos has served as a president of the Czech and Slovak heritage Association that is headquartered in Baltimore and grown to include a national membership of over 1,000 members. This organization, created fifteen years ago before the split between the Czech Republic and Slovakia, offers courses in Czech and Slovak languages, history courses, meets quarterly, and hosts an annual festival that draws nearly 1,000 people from several states.
Since 1999 Mr. Rokos has been on the Board of the American Friends of the Czech Republic, and was elected vide-president of that group in December, 2000. Mr. Rokos is a member of SVU, the Czechoslovak Society of Arts and Sciences and he presented a paper at a recent SVU gathering in St. Paul, Minnesota. Mr. Rokos actively lobbied for NATO expansion to include the Czech Republic, personally writing over 750 letters and lobbying the Maryland Congressional Delegation to support the application of the Czech Republic.
In the summer of 2000, Mr. Rokos visited the Czech Republic and participated in the language course for countryman sponsored by the Czech Foreign Ministry.