HISTORY OF THE PETRIN CABLE (FUNICULAR) RAILROAD IN PRAGUE 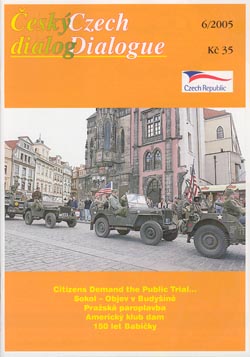 As well known, the Provincial Jubilee Exposition took place in Prague from May until October, 1891. Its main purpose was to demonstrate in particular the high level of both Czech science, and technology as well as economy and the arts, existing already at that time… Thereafter, such goals were attained to quite a great extent. Indeed, this significant and meaningful action has definitely left us marvelous heritage up the present days. Besides the Industrial Palace, constructed on the extensive special Exhibition Area in Prague 7 (Holesovice), the Petrin Outlook Tower was built as well. The latter has become one of the Romantic establishments, domineering Prague´s evening scene over the town´s rooftops. As a result, the above-mentioned Calbe Railroad has been inseparably connected with it as an usual means of personal transportation.

The idela to construct the Petrin View Tower was launched by the Czech Tourist Club in the eighties of the 19th century. Originally, they were considering first to set in motion only a View Tower, while much later, they would start to think about a Cable Railroad, thus enabling an easier access to it a rather steep hill. The decision relating to these projects sped up considerably the materialization of the Provincial Jubilee Exposition, which was being prepared in its planning stages at that time… Hence, the setting up of the first Cable Railroad in Petrin was started in January 1891, while simultaneously, the construction of the View Tower was initiated at that time as well. The Cable (Funicular) Railroad had originally quite a different loction than it has nowadays. In fact, it was direct and shorter. While its lower station was located in the present small alley, bearing the name of “At the Cable Railroad”, the upper station was established quite close to the Nebozizek restaurant. The Cable Railroad overcame the height difference of 102.2 meters (i. e. abt. 111.777 yards) with 267 %o decline. It measured in its total 396.5 meters (i. e. abt. 433.62 yards) which meant that in Austrian-Hungarian Empire, it was the longest available Cable Railroad at that time. Two wagons were driven on their rails, applying a system of three-rails – the central one was common for both of them. In order to get out of their way, the wagons gave way to each other on the short two-rails leg. The Cable Railroad was moving thanks to its system of water power. Both wagons were equipped with voluminous thanks, into which the water was always pumped at the upper station. In so doing, the upper wagon over-balanced the lower one, and thus, it was pulling it upwards by its own weight. The wagons were produced by the Ringhoffer Factory in Prague-Smichov. Their length was 6 meters (i. e. abt. 6.56 yards) and their width 2 meters (i. e. 2.29 yards). They were divided into four compartments. Their capacity was to accommodate about 50 pesons/travellers. The operation of the first Cable Railroad was started on July 25, 1891 at 3 o´clock P. M. Accordingly, in the course of the first year of its working, they transported 82,404 passengers.

The activity of the Cable Railroad was interrupted by WWI. Herreinafter, there were several attempts to reinstate its activity. However, it was only at the beginning of the forties of the 20. century, when such an edeavor was accomplished.

During the year 1931, the Cable Railroad changed its ownership. The community transferred it to Electric Enterprises in Prague. They undertook some changes of the wagons, because the original ones ended up in disrepair. Withal, the trail body was completely dismantled. With some exeptions, varios parts were completely liquidated, while some of the parts were handed over as exhibits to the Technical Museum in Prague. Furthermore, the lower part of the Cable Railroad has partially changed its direction. Thus, a new lower station was installed, which was made by changes, which were to be undertaken in the private house Nr. 412-III. Moreover, the rail track was lehgthened. As a matter of fact, because of its construction, even the Wall of Hunger had to be partially destroyed, and applied for this Cable Railroad. As for the upper station, it moved to the location, situated close to the View Tower. Consequently, the Cable Railroad length attained 511 meters (i. e. abt. 558.8 yards), the height difference amounted now to 130.45 meters (o. e. abt. 142.77 yards) and maximum decline was 198 %o.

This “new” Cable Railroad had only one rail with corresponding points in the middle of the trail. Also in this instance, Rinhoffer Factory was their producer. This time, the wagons´ length was 12 meters (i. e. 13, 12 yeards) and their width equalled to 2.4 meters (i. e. 2.62 yards). Consequently, up to 100 passengers could be transported, of which 25 persons were sitting and the remainder of them stood. The water drive was substituted by a modrn one, namely by an electric motor. The Cable Railroad operation was safeguarded by full automation. As regards the servicing of the wagon, it sufficed only to press the starting button. It ran for the first time on June 5, 1932.

Regarding the second Cable Railroad, the incessant rains in the summer of 1965 proved fateful for its existence. The trail was considerably soaked due to the strong water occurrences. In consequence, its operation had to be interrupted. The final blow to it was that two years later, quite a vast landslide of approximately 170 meters (i. e. abt. 185.9 yards) of the railbody was completely destroyed. For its renovation, the Cable Railroad had to wait full 16 years, before its operation could be renewed First of all, the Petrin slope had to be adequately reinforced. In this respect, several scientific research projects were undertaken, before it was possible to approach the reconstruction of the Cable Railroad. Its course remained the same. In the first place, it was necessary to carry out a repair of those parts, which were subject to the landslide. Such parts were then substituted by a monolitic construction, which was stifened by several supports. Yet, the latter had to be thorougly anchored in order do assure that such portions of land, which were not mouldering, were really a reliable rock of the slope. The mechanical and driving equipments “which the volunteer workers had very assidously conserved during the 70ie, were, after a very minute check-up, recognized to be applicable. The same was done as regards the axels and equipments of the wagons´safety brakes. On June 15, 1985, the new parts were supplied by the Studenka Vagon Factory. Indeed, this was the third time, that the Petrin Cable Railroad was solemnly put into motion. This same Cable Railroad is still used on the route Ujezd–Nebozizek–Petrin at the present time.

As it was already described in the preceding part of this message, Petrin Cable Railroad got to its inception in order to facilitate the future visitors´a more comfortable access to the Petrin View Tower. Its plans were created by an engineering company, headed by Frank Prasil and Julius Soucek, First, a Petrin View Tower Co-operative was established. Its purpose was to look after a successful course of its construction, which lasted an unbelievably short period of time. In fact, only within 5 months and 6 days, there was raised over Prague a free copy of the Paris Eiffel Tower. Both towers, i. e. Prague and Paris towers have, by coincidence of circumstances, their peak height at the same above-sea level. However, the difference is that the Petrin View Tower is five times smaller, as it measures only 60 meters (i. e. about 65.62 yards). Officially, it was permitted to use it on August 20, 1891.

The View Tower was recently reconstructed. Nowadays, it is again open to be used. It offers the visitors the opportui¨nity of a charming outlook over the town of Prague. There is a chance to do so either from the viewing gallery, available to the passenger at the height of 15 meters (i. e. abt. 16.4 yards) or from the newly established gallery space at the height of 20 meters (i. e. abt. 21.87 yards). The latter originally served television technicians for their emissions. Into the bargain, the recent lengthening of the elevator´s lifting capacity enables the visitors to use it in order to get to the upper gallery. In the basement of the View Tower a Permanent History about its founders was located known as Club of Czech Tourism.

Surprisingly, the first Cable Railroad in Prague was not that one which was constructed on the Petrin Hill. Only several days earlier, it was preceded by a Cable Railroad in Prague 7 (Holesovice). This one started its operation on May 31, 1891. It was also established on the occasion of the Provincial Exhibition. Its trace was initiated at the Czech Bridge, at that time called Franz Joseph Bridge, and led uphill to the Letna area. The length of the course was 130 meters (i. e. abt. 142.17 yards), and the height difference between the individual stations was 38 meters (i. e. abt. 41.6 yards). Two wagons were then applied and it had also a water power drive. However, the consumption fo the water supplied by the Water Tower in Letna Hill, was too high (the water tanks took hold of 2000 liters /i. e. abt. 440 gallons/). Consequently, the Cable Railroad operation was unprofitable. In the first place, it caused a catastrophic water pressur decrease in the upper floors of the houses in Letna. Because of that, in 1902, this Cable Railroad was electrified by the famous Frank Krizik. The Letna Cable Railroad stopped its operation in 1916, and sice that time, it has never been set again into motion. Instead of the Cable Railroad, the covered moving staircase was created on the same spot Perhaps, there might still be samoe vitnesses who can remember it. These stairs were in operation until 1937.