15th anniversary of the fall of Communism in Estern Europe: we must not forget! 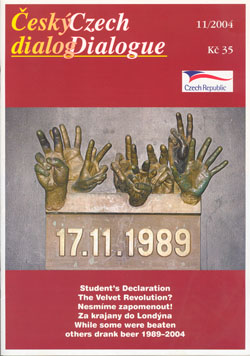 The autumn of 2004 marks the 15th anniversary of the disintegration of communist regimes of Central and Eastern Europe. My former homeland of Czechoslovakia (split after January 1st, 1993 into the Czech and Slovak Republics) celebrates 15 years of freedom on November 17th.

Why should we all, whether we live in the former countries of the Soviet block or not, reflect on this occasion? We are already preoccupied by the repercussions of the American presidential elections and bombarded daily by the news of horrifying obstacles thrown in the way of possibly misguided efforts to promote functioning democracies in post-war Iraq and Afghanistan. It is easy to dismiss, unfortunately at our peril, the 15 years of post-communist development of Central and Eastern Europe as inconsequential.

The scenic beauty and culture of Prague or Budapest, new major tourist destinations still offering great value for our dollar, makes us forget the four decades of communist trampling upon human dignity that took place in those picturesque countries prior to the “velvet revolution” 15 years ago. We derive satisfaction from the fact that Czech Republic and other post-communist countries have already joined NATO and more recently became members of the European Union, without noticing that in June this year the Czech Republic elected 6 members of the Communist party to the European Parliament. The news of a re-surgence of followers of barely disguised Nazi ideology, who are rearing their ugly heads within the vague boundaries of the struggling justice systems in post-communist democracies, does not ring our bells of alarm.

We should have learned the lesson a decade ago, when we were suddenly confronted by the explosion of genocidal war in the post-communist Balkan republics of the former Yugoslavia, but obviously we have not. We should have learned by now, but obviously have not, that unless the atrocities of the past are carefully recorded and preserved in the common consciousness of nations, the danger of experiencing them again and again is extremely high.

The lack of attention paid to some ominous recent developments on the political horizon of the fledgling democracies in post-communist Europe is particularly surprising because many Western countries have over the past half Century generously welcomed millions of political refugees from the region, many of whom have contributed greatly to the arts, sciences and professional life of their new homelands. The collective memory and the cultural and educational heritage of these immigrants from Central and Eastern Europe and from Russia – and the widely recognized achievements of many of them – have became a part of heritage and have blended into the identity of many Western democracies. Future generations of all these countries will be influenced by the educational experiences and traces of memory passed on to their children by the refugees from the communist dictatorships of Europe.

It is precisely my great concern about these collective memories, and specifically the unbelievable and regrettable lack of any effort by modern historians to preserve them, that prompted me to start a new initiative. The project “We must not forget”, has already been embraced by Canadian and American citizens of Czech and Slovak extraction and deserves to be brought to the attention of all of us. It will appropriately mark the 15th anniversary of the passing of a criminal distortion of ideology, which, for a considerable part of the last century, deprived half the population of Europe of basic human rights, dignity and justice, and which dulled the receptors for decency, cutting deeply into the national moral fiber. Generations of well educated, talented and hard working people, whose creative potential could have enriched us all, were sacrificed at the whim of self-centered and ignorant party apparatchiks under a system that furthered one of the largest false pretenses of recent history. Fifteen years ago the whole world was caught by surprise by the sudden disintegration of the communist system in the Soviet block. We all cheered the re-birth of democracy in post-communist countries and many of us immediately offered our help. With perhaps somewhat naive enthusiasm we offered our knowledge, experience and expertise to make the transition to democracy as expedient and as painless as possible. Unfortunately we were not always successful . Frustrated, we often watched the new politicians repeatedly making unnecessary mistakes. Together with foreign observers, historians, journalists – and even some politicians – we couldn’t believe our eyes when reading that the Czech Communist party repeatedly attracted almost 20% of the popular vote. Many of us still fail to realize that the current communist supporters do not consist only of the graying remnants of shortsighted and corrupted loyalists, whose lack of moral courage and judgment the Party always exploited and richly rewarded. The sad truth is, that the majority of current communist voters in Czech Republic and elsewhere are young people, who see the shortcomings of the democratic political parties but have never personally suffered the wrath of a Communist dictatorship; people whose memories do not reach beyond the past 15 years of democracy and who simply do not know any better, because our generation has failed miserably to share its experiences with them. Experiences that derived from an ideology that was so easily corrupted for vengeance and personal gain! How can they know? How can they appreciate not only the appalling injustice but also the tragic loss expertise and experience that inevitably accompanies such an ideology? It has never been recorded anywhere, for instance, that my father, a hard working, well-liked and successful businessman and owner of a famous old coffee store next to Charles bridge in Prague, was arrested immediately following the communist take-over of Czechoslovakia in 1948 and, like tens of thousands of other professionals, business people and intellectuals, spent years in prison, without any charges ever being filed other than the profane label of “enemy of the proletariat”. His business and all other property was confiscated, and even after a subsequent “amnesty” he was forced to spend the rest of his life as a laborer in mines and ironworks. They don’t know that my uncle was incarcerated unjustly for years in the military prison at Mirov and that, after all charges against him were finally dismissed, he was forced to leave his career as a senior officer in the engineering corps and was given a job stoking boiler furnaces in a Laundromat. Nobody has ever told these new communist voters that several of my relatives, who for generations ran successful wheat and sugar-beat farms in central Bohemia, had their farms confiscated and turned into State Collectives operating at huge deficits for the next forty years. Their agricultural knowledge, acquired over many generations, was “used” in a series of low-paid unskilled jobs. Even then, they worked themselves into early graves because they could not help but still love “their” land. The heart of my terminally ill distant uncle was finally and sadistically broken by the new owners, who ostentatiously led his beloved horses to the slaughterhouse in front of his hospital window… These are brief examples of the injustices bestowed on only one ordinary Czech middle-class family; only a handful of the millions of crimes committed everywhere in the name of the “dictatorship of the proletariat”, which, until now, have never been recorded. My memories are just a little drop-in-the-ocean of evidence that is yet to be collected and preserved for future generations to learn from.

A few of the most visible cases of political victimization have made their way into the history books, but the memories of the millions of ordinary, productive lives destroyed in Central and Eastern Europe in the name of communist ideology will slowly but surely recede with the passing of each of us who still remembers. Unless we do something about it, the principal part of the huge iceberg of evidence of the atrocities committed by the corrupt communist regimes of Europe, which until now remains well below the surface of historical recognition, will inevitably dissolve into the darkness of never recorded facts. Future historians will never be able to evaluate the full extent of communist influence upon the history of the second half of the last century without a database that documents the lives of ordinary citizens derailed by communist regimes.

Do we, the survivors of Communism, really all resign our historical responsibility? Will our silence continue and our testimonies die with us? Will we allow the lives of hundreds of thousands of our relatives and friends to disappear from history without a trace left behind? Will we not give others a chance to learn from our experience?

The answer must be a resounding “No!” Canadians of the Czech and Slovak extraction have already started a new initiative to collect a database recording the lives and experiences of ordinary citizens of the former Czechoslovakia who were persecuted by the communist regime. After 15 years of democracy, it is high time to finally record our memories. Past resistance against collecting such evidence was perhaps related to the fear of retributions from the perpetrators of political persecution, many of whom became the new capitalist moguls; even the fear that some compensation might be demanded by the victims is no longer relevant as the dismal failure of such attempts during the past fifteen years has shown. We must not allow these selfish considerations to prevent us from fulfilling our obligations to future generations!

Our initiative has already gathered the wide support of many exile organizations and some important institutions in the Czech Republic. The Czech Documentation Center (CSDS, a division of the Czech National Museum) headed by the historian Dr. Vilem Precan will establish the database and is already receiving the information.

Now, it is up to all of us, citizens of Czech and Slovak Republics, and the political refugees and their children from the former Czechoslovakia, to provide the necessary material. On behalf of all the nameless victims of communism and of future historians, I appeal to all of you most urgently to send your memories, however simple and perhaps fragmented they might be, either electronically to : csds@centrum.cz , or by mail to : CSDS, Skokanska 3, 169 00 Prague 6, Czech Republic. Letters, documents, and voice recordings on cassettes or CDs, either in Czech, Slovak, English or French will all be received and entered into the database for future archival use. I also take the opportunity of the 15th anniversary of the liberation from communist regimes to urge all citizens, refugees and their friends and relatives from other post-communist countries of Europe to establish and operate similar databases. We should all follow the example of the people of Israel who successfully established in 1953 the Yad Vashem (the Holocaust Martyr’s and Heroes’ Remembrance Authority), and entrusted it with documenting the history of the Jewish people during the Holocaust period, preserving the memory and story of each of the millions of victims, and imparting the legacy of the Nazi atrocities for generations to come. Sixty two million pages of documents have already been collected! Let’s do the same for the victims of the other criminal dictatorship of 20th Century Europe!

Finally, let me mark the 15th anniversary of the fall of Communism in Europe by appealing to everybody, regardless of hers or his citizenship, to pay more attention to the birthing pains of the new European democracies in the context of their communist past. It may help us to better understand the global reality of the 21st Century. Only by documenting and remembering the crimes and injustices of the past we may avoid repeating them in the future!