THE BEGINNINGS OF THE SOKOL MOVEMENT 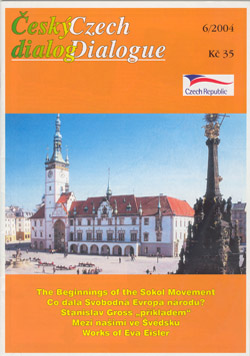 In 1862, an independent Czech Gymnastic Club was established by a group of youthful Czech patriots, active in the constantly spreading patriotic activities throughout the Czech nation at that time, following the demise of the Bach absolutism in the Austro-Hungarian Empire.

The then thirty years old Dr. Miroslav Tyrs readily joined this movement in which he saw the path to the realization of a full renaissance of the Czech nation from all points of view. Having finished his university philosophy studies, he was at that particular time employed as tutor in the family of a wealthy German industrialist Bartelmus in north-west Bohemia near Jachymov. His theory was that nation does not only need power, wealth and well educated people, but also citizens with organizational ability, respect for discipline and cooperation as well as physical excellence and the ability to set aside individual interests to the interests of the entire nation. Through his experience in the various gymnastic organizations he realizes that physical exercises does not affect merely one´s physical well-being, but lead by good, experienced instructors, it can affect the development of one´s character and his social attitudes.

In this line of thinking Tyrs found exceptional understanding of a truly rare man he had met in the Bartelmus family circle. It was Jindrich Funger, a German merchant from Prague who used to spend his summer vacation close to Jachymov. This noble, broadminded man and convinced democrat was well aware of the excellence of the Czech nation and having alligned himself wholeheartedly to the country where he lived, he also gave much thought to the problem of how we could help this nation. The two man thus met on a common ground and Fugner readily agreed with his plans advanced by Tyrs.

They both returned to Prague just at the time when formation of the Czech Gymnastic Organization was being considered and planned. The two men reached an agreement with Dr. Edward Gregr and Professor Emanuel Tonner, and with their well thought-out program they quickly assumed the leadership of the organization. They also secured the cooperation of further outstanding national leaders. From its very inception, the new oganization´s most outstanding characteristics was its democratic spirit, insisted upon especially by Funger. The spirit of equality, expressed in the use of addressing each other as „brother" attracted participants from the broadest strata of contemporary life, and it quickly turned into a nation-wide movement. At Professor´s Tonner´s suggestion, it was named „Sokol" (Falcon) and the falcon in flight on its banner became the symbol of high flight and courage. Tyrs believed that the movement should involve the nation as a whole and that´s why he called forth the slogan „Every Czech – A Sokol".

Yet the road to success was not without obstacles – in the committees of the newly formed units struggles started between political groups – particularly the Old Czech groups and the newly formed Young Czech Party tried to gain influence and control. But director Fugner did not hesistate to intervene and so after only seven months of its existence the original committee resigned and the newly elected brothers were not involved in any political activities. „Let us be a community of united brothers, not divided by political or religious differences" declared Fugner. And that became law among Sokols. Later, other differencies appeared, but Tyrs´s strong emphasis on the role of Sokol in physical education and his prudent leadership prevailed. Thus, in just three years, in the year of Fugner´s death, there were already twenty active units in Bohemia and Moravia, with 2000 members; and also in other parts of the Austro-Hungarian Empire with Slav inhibitants, Sokol was established in Slovenia, Croatia, as well as in Poland. Only in Slovakia, a part of Hungary, it was not allowed, while in the Serbian kingdom in the Balkans Sokol units were founded. And even the new Czech immigrant communities in America started organizing Sokol Groups. By 1871, 120 units with 11 000 members existed in Bohemia and Moravia! The movement continued to prosper, grow and maintain a close contact with all these groups; this inspired the Sokol leadership in Prague with the idea to start organizing periodic convergences, referred to as Sokol Gymnastic Festivals, the Slets, to which members would „fly in" like the birds whose names they bear, from wide-spread regions. To these nationwide Slets would come Sokols from many units established in other lands as well as many foreign friends.

The first such Slet was held in 1882 under the personal direction of Dr. Miroslav Tyrs, the founder of Sokol. The second Slet was planned for 6 years later, but was not allowed by the Austrian authorities and replaced by hurriedly arranged sport races in Cesky Brod near Prague. It could materialize only in 1891 again in Prague. From then on the Slets were held every six years, as follows: Third Slet in 1895, fourth in 1901, fifth in 1906, sixth in 1912. The First World War interrupted the Fesstivals. As free Czechoslovakia was established in 1918, the seventh Slet in 1920 was the first one organized in an independent new country with also new Slovak groups participating. The three following Slets (1926,1932,1938) had a constantly growing attendance and reached a standard of perfection in synchronized mass exercises. After the Second World War, the eleventh Slet was held in 1948, but, unfortunately, it was the last one of the free Sokol movement. The Communist regime allowed the Slet to be held, in order to show the world that „nothing has happend" and that the nation agreed with the new regime. They later replaced the Slets with their own version of gymnastic festivals they called the Spartakiadas.

But according to Tyrs´ beliefs, a nation is not just its men, already children should be able to get accustomed to the Sokol discipline and „the best qualities are implanted by motherly care and teaching", he proclaimed. And that led him to initiate and help to establish in 1869 the „Gymnastic Society of Women and Girls of Prague", an organization that conveyed the Sokol idea to women.

And now we are reaching the main topic of our subject, namely „the role of women in the Sokol movement". It was certainly not an easy task, as the society in the last years of the 19th century was not yet ready for such revolutionary changes. Even the most progressive thinking and patriotic Sokol men were quite far from the decision to make the female members of their families equal parts at the „Sokolovna". They considered Sokol a purely male organization, which had to be sheltered from „the rising tide of feminity". The Gymnastic Society of Women and Girls of Prague was struggling for survival and continued its activities only due to the fact that its leading members were the most esteemed women writers and other highly respected female citizens. In smaller towns, where such personalities were missing, the organization did not last. Nevertheless, women continued to struggle for participation in the national Sokol movement. It seems that Moravian women were more corageous and possibly more pushy to attain their goal. In Prague, the most successful was Sokol Vysehrad, led by the Heller and Fucik families whose male members managed to push through acceptance of women in Sokol, under the condition that although they could exercise only twice a week, they would pay full membership fees. In the Sokol halls, the main improvement was the fact that women were leading the female exercise groups and consequently participate in the instructor training. Otherwise, the entire leadership and schooling of instructors was entirely in male hands. Yet slowly, but surely, women managed to assert themselves and be able not only to lead their own groups, but participate in the choice of their representatives and the type of exercises to be introduced in their groups as well. In spite of this small progress, women were not yet directly represented in the Sokol leadership and whatever they decided at their meetings, had to be presented at the general assemblies by a „brother" (a male member) who participated at those meetings. There were also problems with the Sokol attire for women. Soon after its establishment, Sokol introduced for formal occasions a special uniform for its male members; yet it was only years later, when women could already become full-fledged members of the organization, that Sokol women had their own uniform, adjusted, of course, to the then customary female fashion. No big problems then – it was different when women started to participate in public gymnastic festivals (Slets), at the beginning of the 20th century. Their attire had to be adjusted to the exercise movements, consequently, shorter skirts, short sleeves, (even pants for certain exercise), etc. were called for. Lively debates were taking place over the subject, but by that time they were already an established entity in the movement represented by more modern minded sisters. That porblem was soon settled to the satisfaction of all. Later, after the First WW in the new Czechoslovakia, when a lot has changed, particularly in the emancipation of women, all these questions stopped existing. It is very interesting to read the authobiography of the female Sokol icon, the long-time leader (nacelnice) of the female Sokols (Sokolky), to describe how some of those minor problems slowly disappeared. I would like to mention, that I had the privilege to know Marie Provaznikova whose book „To byl Sokol" I edited in the last years of her life.

The following part of my speech is based on excerpts of her authobiography and talks mainly about the participation and influence of female members of Sokol through the years. In some parts, I will quote directly Marie Provaznikova, who died on 11th January 1991, at the age of 100 years.

„It was in the last 2 or 3 years of the 19th century when I first got in touch with Sokol, at the age of 7 or 8 years, I don´t remember exactly. How did it happen? Very simpy – A schoolmate whispered to me during a recess: „I started going to Sokol; I like it why don´t you come too?" To mygreat surprise, my mother reacted to my report very positively. „I also have been thinking that you should attend Sokol; I myself did and I remember it with pleasure. We have to ask when the pupils exercise, go there and see what they wear." Even though the standard of living at that time was incomparably lower than today, nobody would imagine to attend Sokol not dressed as required – that´s how highly Sokol was esteemed! So we went to the exercise class, mother talked it over with the lady-instructor and a week later I went, properly dressed, to my first Sokol class, proud to be a Sokol pupil. And since that moment more than 80 years ago, my whole life was linked with Sokol, its development, its glory and its downfal.

Altough at that time women were already allowed to be members of Sokol, they were far from being members of equal standing. Women could lead some of the twice-weekly exercises classes, but the over-all leadership and decision making remained in the hands of men only. Yet, slowly but surely, women were reaching higher and more important positions and at the beginning of the 20th century, already 91 women sections existed in Bohemia and Moravia. They could participate also in some of the newly established sport sections of Sokol. The progress was on the way.

Women could already participate in some mass exercises on the 4th slet in 1901, gained even more equality in the coming years and just few months before the first WW on May 10, 1914, a resolution granting women full membership in Sokol was passed. After 1918, in the newly independent Czechoslovakia, full equality of membership in Sokol was established. The life of Marie Provaznikova is a testimony of that evolution.