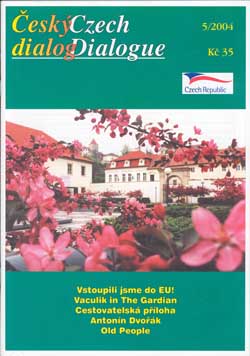 Returning to Eastern Europe felt like being a disembodied soul returning to the flesh – I felt myself able to walk, breathe, talk, but it would be a while before I could really wiggle my toes and fingers.

I arrived in Prague on a mild, snowy morning. Everything was covered with a white blanket from above, but the streets were covered with brown slush and dirt. Before I saw all the much expounded-upon beauty, I saw the airport, the roads, the houses, the gas stations on the outskirts of the city. Too stunned and tired to understand or speak any of the Czech I’d learned prior to coming, I communicated with my host family in a mixture of words and gestures, along with slow, loud English that reminded me of every ,Obnoxious American‘ stereotype. The house where I would be living for the next four months made me feel again like a sleepwalked in a hazy, surreal dream. I had BEEN there before, I thought, but I knew it was a strange illusion, a product of imagination and memory. The room was clean but slightly mismatched, slightly shabby. There was a tiny assorment of dusty fake flowers on the desk, assorted pictures, plastic wallpaper. Clean but faded, beauty buried deep beneath years of deprivation – that’s just how I remembered it.

I am not Czech. For the sake of ease I may classify myself as a Russian, though I am Jewish and am partial to describing myself as perpetually ,passing through‘ whatever country I may live in– able to adjust, able to thrive, unable to fit in (would I want to?). I grew up in Leningrad (before it retured to its elegant pre-Revolutionary name) during the last gasps of Soviet rule. It was a time when people were rarely still thrown in jail for political reasons, when the power of the Secret Police was dwindling, when Gorbachev was introducing glasnost – but also a time when there was only one flavor of ice cream on the rare spring or summer day, when only my American uncle could get me a Barbie doll, when buttons with pictures of Lenin as a boy were regulation uniform items for schoolchildren, and many summer afternoons at the Dacha were spent waiting in line for bananas. Two years after the Velvet Revolution brought the withering Communist regime of the Czech Republic to ruin, news of my family’s departure to America had to be whispered among the neighbourhood circles. The last months of my seventh years were spent watching buyers and porters empty out the apartment I shared wtih my parents and grandparents of all its sellable items. Gathering money to start a new life, my parents looked ahead while I could only stare at the mark on the wall against which a cupboard or a shelf used to lean.

Growing up in America, I took my origins and background with a grain of salt, learning to laugh at them with the sarcastic sense of humour I inherited from my mother. I loved putting my ironic spin on stories of endless bread lines and bare grocery shelves (and my mother’s horror when these things were the subject of my childhood drawings), and later of the early years of life in America, when our low-income apartment building turned off the heat in dead winter or when we could only afford the two-dollar chicken breasts for dinner every night of the week. My Soviet-Russian heritage was something I was alternately proud and embarrassed of, but while it was good material for writing and jokes, it was rarely something I was willing to accept as a major part of whoe I was. Except for my fluency in Russian, or minor things like my preference for the plain foods I’d grown up on, I wasn’t sure that the ,Old Country‘ had left any imprint on me.

As I got older, my perspective changed. I became fascinated by Russian history, Russian language (and how lucky I was to be bilingual), and the social effects of Communism. After years of casualness, I began to redevelop my linguistic and cultural connections. My father went to Russian to visit friends for a week and returned disgusted– he couldn’t stand the sights, smells, and prevalent behaviors of Russian society and found himself awaking in the night with the fear of not being allowed to leave. But I was convinced that Russian– and the rest of the former Bloc– were fascinating places. In college I began to study Eastern and Central Europe, immigration, and literature, and I decided to study in Prague.

I chose Prague for a seemingly silly reason– though life-changing incidents are often small and barely noticable when they occur. For Hannukah a year ago, my best friend gave me a copy of The Unbearable Lightness of Being by Milan Kundera. This book opened my eyes– really opened them for the first time– to the concept of Soviet-era literature and the writers who reflected and perhaps even subverted Communism through thier insightful, philosophical writing. Falling in love with Kundera and other Czech writiers inspired me to begin learning Czech, to base my program of studies on Easterna nd Central European literature and history, and to come to Prague. I wanted to see with my own eyes the world that Kundera, Klima, and others had evoked for me in their complex, elegant novels.

A word on language. I cannot count the number of times I’ve been told that Czech should be simple for me because I am fluent in Russian. This is untrue. Czech is far simpler for a Russian speaker than for one with no Slavic base, but it is still difficult– more difficult than for, say, a speaker of Polish. Despite having studied Czech for two semesters before arriving here, my knowledge was mostly composed of piles of vocabulary words but low comprehenision and a marked inability to string together more than a few sentences. For the first two weeks that I spent in the Czech Republic, I walked around dumbfounded at the sound of Czech– the intonations, the inflexions, the at once hard and melodious quality to the language– all these sounded like a song of many voices, a song that reminded me of one I knew but which was far too different to make sense. I’ve been here for three months now, and my linguistic situation is still strange. While my comprehension has risen to a good level as a result of training my ear to hear Slavic words in a different way, my speaking ability is still somewhat stunted. My propensity to confuse Russian words and pronunciation with Czech, along with the eagerness of most Czechs to practice thier English (or sometimes Russian), my opportunities for speaking have been relatively few.

As my time here dwindles, I am confronted with the necessity of understanding my connections to the city and the region of the world.

I have learned several things about myself here, one of the most important being that while I love European culture and have a strong connection to the styles, attitudes, and behaviors of this part of the world, I am much more American than I ever realized. My infatuation with speed and efficiency, achievement and multitasking, politeness and all that goes with it, make me unwilling to survive for much longer than a few months in Eastern European society– though maybe this will change as the society adjusts to its membership in the European Union. I love Prague– its beauty, though now cliched and oft-described, is unsurpassed.

I feel fortunate to have spent time here– both to reconnect with my murky Eastern roots and to learn a new culture and language. The joy and revelry that is Prague’s alternative youth universe will always remain with me, and someday I hope to return and experience it again. But, bathed as I’ve been in the lights of American grandeur, I now understand that my roots are a part, not the whole, of who I am.